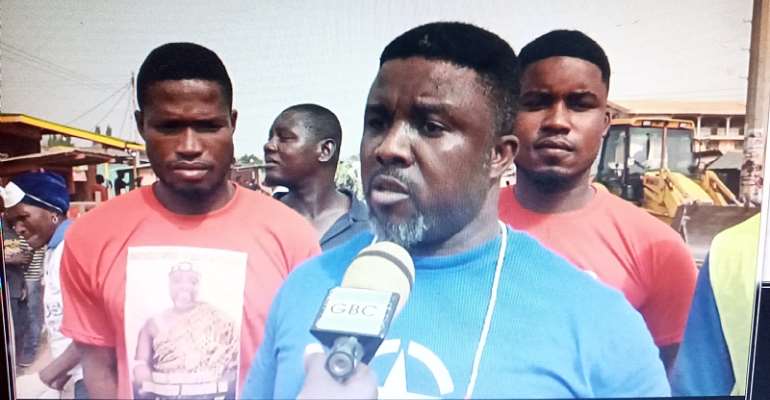 The Chief of Dawhenya Osorshie, Nene Mantey Kwaku Adden II, has called on Ghanaians to take cleanliness as one of their cardinal resolutions and keep their environment clean at all times.

Nene Mantey Kwaku Adden made this call when he joined in a clean up exercise held by the Church of Pentecost in Dawhenya.

The members of the church, with support from the Dawhenya Assembly, as well as the Muslim Community and the Dawhenya Traditional Council led by Nene Mantey Kwaku Adden II cleaned up the community.

They distilled choked gutters and cleared the refuse along the main streets of Dawhenya. Nene Martey Kwaku Adden II said maintained that it is everybody's duty to clean up their surroundings and also ensure that refuse are properly disposed of at all times.

The cleanup exercise was also supported by the District Chief Executive of Ningo Prampram Jonathan Teye Doku who told our reporter that his assembly is working to ensure that opened drains are all covered to deter people from dumping solid waste into the drains.

He commended the Church of Pentecost for the initiative.

The Dawhenya District Pastor of the church of Pentecost Pastor Ofori Koranteng said as much as the church is concerned about the spiritual growth of its members, they are equally concerned about their physical health, he said healthy environmental practices are ways to ensure the physical well being of the people.

He said Subsequent exercises by the church was underway across the 16 regions of the country, hoping that everybody will play a part in keeping their surroundings clean, he said cleanliness will enhance the health of our environment.