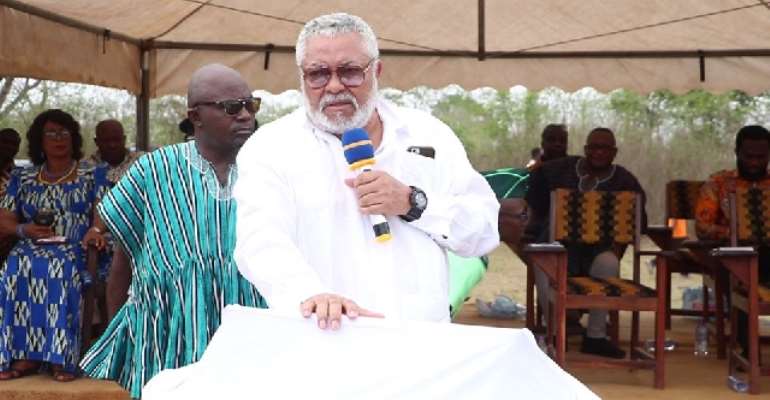 Ex-President Jerry John Rawlings on Friday used the occasion of the Independence Day celebrations in the Sogakope District to show solidarity with the family and people of the area following the death of the assemblyman of the area, Marcus Mawutor Azahli last week.

The former President also urged the police administration to equip its men to enable them perform their roles effectively, urging the people and the security agencies to be vigilant to prevent such violent, criminal attacks.

The former President said he should have been in Kumasi for the national parade but excused himself. “I excused myself to join you here to express my condolences and sympathies to all that has happened over the last month”.

He said he was hopeful that correct information will be forthcoming to ensure that those responsible for the savagery are dealt with.

“I think some of these things happen because some of the killings that have been going on in this country and especially in this area are not being dealt with appropriately, so people feel they can do things like that with impunity and get away with it, knowing they will not pay the price with their lives as well," he stated.

Describing the parade as one of the most impressive he had witnessed since he started observing the annual District event, former President Rawlings expressed his admiration for the energy on the ground and urged the people to preserve and use it for the benefit of the area, the region and the country.

He also advised students and the youth to desist from the illicit use of drugs such as tramadol, urging them to appreciate the pain their parents endure to raise resources to educate them.

He said it was imperative that they studied hard to achieve the highest academic qualifications to enable them to contribute their quota to the development of the community.

President Rawlings also cautioned okada riders and other commercial drivers to desist from drink driving as that had been responsible for increasing reports of motor crashes in the area.

“If you are an okada rider or a driver and you want to go and die, go and die, but do not take along people on your bike or in your vehicle and drive irresponsibly or drunk or tired and kill people,” he warned.

On the erection of speed ramps within the South Tongu area, former President Rawlings described most of the ramps as ‘obstacles’ that weaken vehicle shock absorbers and springs leading to preventable road accidents.

“We are doing something very illegal. In trying to slow down vehicles on the roads around where we live, we are building illegal, illegitimate and inappropriate speed ramps.”

Flt Lt Rawlings recalled how a VRA official who had an accident over one of such ramps developed a serious injury to the vertebrae. He said there is a proper way of constructing such ramps and called on those responsible to ensure they construct such ramps responsibly.