By Johan Swart - The Conversation 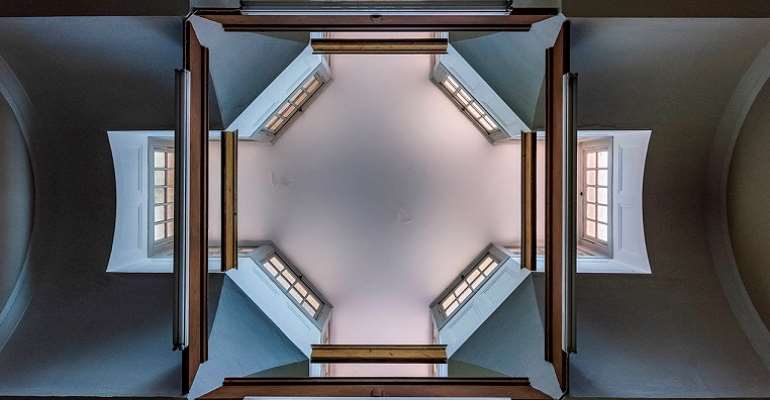 The skylight of the Weskoppies Chapel in Pretoria. - Source: Alain Proust/Hidden Pretoria

Pretoria, South Africa's capital city, contains many historical sites where government facilities have been built and developed since the mid 1800s. These often unappreciated places narrate the city's historical and ongoing political significance. They contain an architectural legacy that reflects the broader history of South Africa. They also expose the conservation challenges that seem to keep the country's heritage sites suspended between care and neglect. A number of these sites have recently been documented by architect Johan Swart and photographer Alain Proust in a publication called Hidden Pretoria . Hidden Pretoria has text by Johan Swart and photographs by Alain Proust.

Pretoria's inner-city buildings tell a history of the city's politically central role. Its 19th century development as the capital of the Zuid Afrikaansche Republiek can be understood through edifices such as the Old Government Building on Church Square, with its beautiful yet underutilised interiors still in excellent condition.

The Union Buildings place it within the British Empire as capital city of the Union of South Africa , but this Edwardian development has also been adopted as the administrative heart of post-apartheid South Africa since 1994. Large scale projects such as the Transvaal Provincial Administration building, now abandoned, date back to apartheid-era South Africa.

Other historical sites featured in Hidden Pretoria are to be found along the periphery of the city and they tell lesser known stories. Examples include the fortifications along Pretoria's ridges dating from the South African War (1899-1902) and the Westfort Leprosy Hospital , now informally occupied by a transient residential community.

One of the most interesting and complex sites is the Weskoppies Psychiatric Hospital , a few kilometres west of the Pretoria Railway Station . View towards the main buildings at Weskoppies, the Transvaal Colony's interpretation of British asylum models. Alain Proust/Hidden Pretoria , CC BY

Weskoppies has been an important node in the country's mental health landscape since the late 1800s. Originally known as the Krankzinnigen Gesticht or Pretoria Lunatic Asylum, it was the first institution of its kind in the region.

It still serves today in its original capacity as the main state-run psychiatric hospital in the region. The extensive property faces severe conservation challenges and it has lost some of its original character in recent decades. But the early 20th century main buildings are impressive and good examples of the era.

Weskoppies was opened as a dedicated facility for psychiatric patients in 1892. Before that members of society deemed “insane” would have been consigned to jails. The construction of Weskoppies to modern standards for humane conditions can be seen as an enlightened step. Of course, the consideration was mainly for the public good. Patients were committed to the facility under the force of legislation.

By the end of the 1800s, Weskoppies was already overcrowded. Significant additions were made by the Transvaal Colony after the South African War. During this time, other medical and scientific facilities were built too, such as Pretoria's Onderstepoort Veterinary Research Institute . The kitchen complex seen within the Weskoppies landscape on the northern slope of a Pretoria ridge line. Alain Proust/Hidden Pretoria , CC BY

The Weskoppies main buildings of 1907 were designed by the Transvaal Public Works Department under the supervision of Piercy Eagle . These comprise an extended chain of Edwardian structures along a ridge, connected by courtyards and long passages that allow for ventilation and natural light in patient areas.

Architectural highlights are the hall and chapel, two beautiful spaces incorporated into the main complex. Originally, Weskoppies was developed as a healing landscape with well-tended gardens and cultivated fields. The landscape still plays a role, but there has been some degradation of the gardens. The more recent building developments have not added to the quality of the site.

Psychiatric facilities often operate outside public attention. Although the sensitivity of their programmes requires a degree of privacy, institutional seclusion is no longer a necessity. Treatment has shifted from isolation to curative practices, and recent academic engagement with the University of Pretoria Medical School also connects the hospital to ongoing clinical research.

The main hall at Weskoppies has hosted memorable musical performances for staff and patients. The communal, spiritual and garden spaces enable regular interaction between patients and volunteer groups. These gatherings and interactions play a crucial role in patient well-being. This is especially true for the many patients who stay at Weskoppies for long periods. The unique Edwardian era gathering hall at the Weskoppies Psychiatric Hospital. Alain Proust/Hidden Pretoria. , CC BY

Today, the original main buildings are only partially occupied but they could carry on functioning as the heart of the campus if they were maintained with care.

Weskoppies is a historically significant site and is formally designated as a provincial heritage resource. So the maintenance and restoration of the grand old hospital should be a priority for government stakeholders.

This article is an adaptation of text published in Hidden Pretoria. You can order a copy of the book over here .

Johan Swart does not work for, consult, own shares in or receive funding from any company or organization that would benefit from this article, and has disclosed no relevant affiliations beyond their academic appointment.

Article
Powered By Modern Ghana
Triangularity of Nuclear Arms Control
How to Spend it: An Austro-Franco-German Proposal for a European Post C-19 Recovery Programme
Paying commission to academics reduces the value of research
How social security could make life better in South Africa after COVID-19
Zambian study points to why some mothers don't carry on taking HIV drugs
South Africa mulls future of its military to make it fit-for-purpose
NPP’s 2020 Manifesto Promises On Education Misleading
Smoke alarms can save lives in informal settlements – if the design is right
Does US military training incubate coups in Africa? The jury is still out
COVID-19 Updates Live Dashboard
TOP STORIES