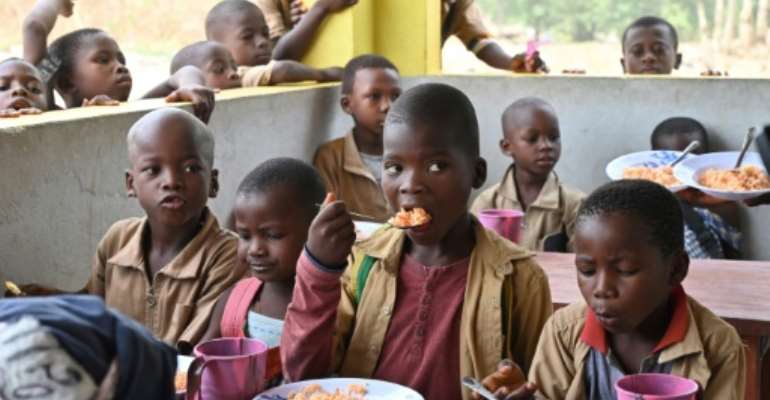 For these Ivorian children, the canteen is a big draw of primary schooling made possible by village women. By ISSOUF SANOGO (AFP/File)

In a poor farming village in Ivory Coast, women are celebrating a new development that is allowing them to send their children to school instead of working in the country's cocoa plantations.

Until now, many families earning less than a dollar (a euro) a day had no choice but to send their offspring to work beside adults in the fields.

Crippling poverty is a major factor in the widespread use of child labour in Ivory Coast, which is the world's top cocoa producer.

But now with the help of a Swiss-based foundation, women in plantations around Kokoti-Kouamekro are turning to a network of small savings banks with the goal of protecting children.

The International Cocoa Initiative (ICI) has been working since 2007 towards the goal of ending child labour in Ivory Coast and neighbouring Ghana.

The ICI identified 200 child workers out of 900 people on the plantations of Kokoti-Kouamekro, a village of some 2,000 people in the Taabo region, 200 kilometres (125 miles) from Abidjan.

The foundation decided to back about 30 women in an association called Bakpa-elai, which watches out for children's interests.

It helped create a "feminine cell for economic reinforcement (Cefrec)", the formal term for the women's bank.

Since 2018, the ICI has set up 14 Cefrec units in the cocoa-growing parts to specialise in savings and credit with the aim of promoting children.

These local units opened the way for numerous money-making activities, including small shops and other business concerns, in Kokoti-Kouamekro and other villages.

With seeds, boots and machetes supplied by the ICI, the women of the village association chose to save almost one euro apiece, after harvesting and selling yams, cassava, corn and other food products.

Village women are also attending classes, with the emphasis on literacy. By ISSOUF SANOGO (AFP/File)

The collected money was placed in a box that requires three "key keepers" with joint access, to reduce any risk of embezzlement or temptation. People who are late for weekly financial meetings are fined.

"In one year, we mobilised about 3.8 million CFA francs (about 5,800 euros / $6,500), and spent two million, with a positive balance of 1.8 million," said Patricia Kouadio Amami, the president of the association, clad in a multicoloured dress and headscarf.

"Thanks to our bank, we pay the people who work on the land in place of the children we used in the past. One of us has even been able to buy a computer for her student son," Amani said.

Empowered by working together, women are also challenging traditions in a rural culture where the father of the family makes all the decisions. The number of women members of the Bakpa-elai association in Kokoti-Kouamekro doubled in one year.

"We used to send the kids out into the fields. Since the women created this association, all that has stopped," he told AFP. "They deserve our respect."

The women have also begun classes in reading and writing, but the innovation that most attracted the children was a school canteen.

"The attendance rate has increased," said Lou Horyphine Koffi, head of the school. "The canteen contributes greatly to keeping the child in school."

"The women of Kokoti-Kouamekro have shown that they are capable of finding solutions to their problems by their own resources," said Euphrasie Aka, West and Central Africa coordinator of ICI.

Still, Ivory Coast is a major regional hub for child trafficking from neighbouring countries, some of whom come in search of work.

More than 1.2 million children were taken on by Ivorian cocoa plantations in 2013/2014, according to the ICI.

"We're going to note a worsening of the problem in absolute terms," Aka told AFP ahead of the release of a new ICI report planned for April.

"A high number of producers has emerged on the basis of the rise in cocoa prices... which implicitly leads to a high number of child workers," the organisation said.