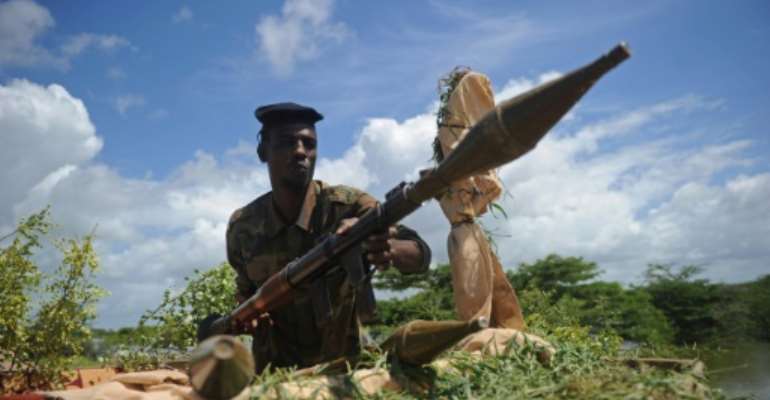 A Somali soldier on guard at the Sanguuni military base, where a US special operations soldier was killed in a mortar attack in June 2018. By Mohamed ABDIWAHAB (AFP/File)

The Pentagon has been issuing near daily announcements of new strikes against the Islamic militants of Shebab in Somalia, seemingly without affecting the Al-Qaeda affiliate's ability to destabilize the country, in what is looking like a new "endless war" for the United States.

The Trump administration's plans to reduce its military presence in Africa while re-centering its efforts toward two key strategic competitors -- China and Russia -- are coming at the expense of French-led operations against jihadists in the Sahel region.

So far, however, the war of attrition against the Shebab has continued unabated.

"Al-Shebab is one of the biggest threats on the continent; they have aspirations to attack the (US) homeland," General Roger Cloutier, commander of US land forces in Africa, recently declared. 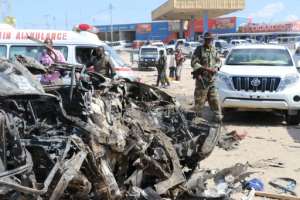 Eighty-one people were killed when a Shebab car bomb detonated at a busy checkpoint in Mogadishu on December 28, 2019. By Abdirazak Hussein FARAH (AFP/File)

"The danger that they pose has to be taken very, very seriously," he said during a recent Pentagon conference call. "So we are focused hard on Al-Shebab."

The US Africa Command (Africom) on Friday announced an air strike on a Shebab target near the town of Qunyo Barrow, in southern Somalia. One Shebab fighter was killed, the statement said.

It was the 20th strike against the Islamist insurgents by US forces in Somalia since the start of the year, after 64 strikes in 2019 and 43 in 2018, according to data from the New America policy center in Washington.

To 'mow the lawn'

"The phrase that people use is 'continue to mow the lawn,' right? Pull the weeds," US Defense Secretary Mark Esper explained late last year, in reference to air strikes against jihadists in Libya and Somalia. 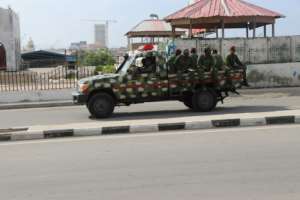 Somali soldiers like these on patrol in Mogadishu face Shebab militants estimated to number between 5,000 and 9,000. By Abdirazak Hussein FARAH (AFP/File)

"And that means, every now and then you have to do these things to stay on top of it so that a threat doesn't grow, doesn't resurge," he said.

But Shebab militants are estimated to number between 5,000 and 9,000, so even if US forces continued to eliminate one or two of their fighters every day, it could take years to kill them all -- assuming that no replacements are recruited.

That makes it sound a lot like the sort of "endless war" that US President Donald Trump detests.

In a first public report on the US military operation in Somalia published in February, the Pentagon's acting inspector general, Glenn Fine, recalled that part of Africom's stated mission is to ensure that by 2021, Shebab, the Islamic State in Somalia and other terrorist groups have been sufficiently "degraded such that they cannot cause significant harm to US interests." 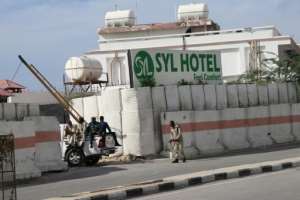 But, Fine wrote, "despite continued US airstrikes in Somalia and US assistance to African partner forces, Al-Shebab appears to be a growing threat that aspires to strike the US homeland."

The inspector general's office operates independently within the Pentagon.

In fact, on January 5, Shebab militants attacked a US-Kenyan military base in Lamu in southeastern Kenya near the border with Somalia, killing three Americans.

Earlier, on December 28, Shebab fighters led one of the deadliest attacks of the decade in Somalia when a booby-trapped vehicle exploded at a busy checkpoint in the capital Mogadishu, killing 81 people.

Some US officials have expressed concern over the lack of tangible results in a war that many Americans know nothing of, a war waged largely by aerial drones and a small force of elite ground troops. 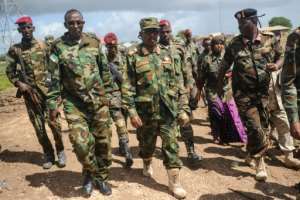 Somali military chief General Abdiweli Jama Gorod (C) visits Sanguuni military base, where a US special operations soldier was killed by a mortar attack in June 2018. By Mohamed ABDIWAHAB (AFP/File)

General Stephen Townsend, Africom's commander, defended the US strategy when questioned in January by members of the Senate Armed Services Committee.

"I don't believe that it's whack-a-mole," or a futile and unwinnable game, he told lawmakers. "We're looking for ways to reduce their capacity wherever we can."

Catherine Besteman of the Watson Institute, a research center at Brown University that each year calculates the cost of US wars, concluded in a report last year that foreign military intervention "has not ameliorated the impact of Al-Shebab activities and, if anything, has augmented its ability to control the local population." 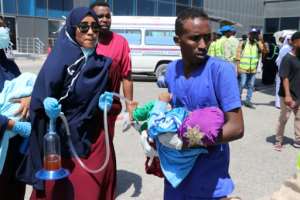 Nurses help a child wounded in the December 28, 2019 car bomb explosion in Mogadishu before being evacuated to Turkey for medical treatment. By Abdirazak Hussein FARAH (AFP/File)

She said that Shebab benefit from a war economy by extorting locals and siphoning off international aid sent to the impoverished country.

Amnesty International has reported that US air strikes have claimed many civilian lives, something the US military has denied.

Amnesty said in a 2019 report that US air strikes -- which it said sometimes indiscriminately targets both Shebab and civilians -- had resulted in the deaths of farmers, workers and even children.

The group accused the US military of showing "appalling disregard for civilians."

Following an internal inquiry, the US forces did admit to responsibility for civilian casualties in one attack: the deaths of a woman and a child in a strike near the central town of El Buur in April 2018.