[email protected]: The Railway Journey Since Independence… Why The US$21bn Renovation Should Concern You

There’s a reason why developed countries have the masses opting for trains day in day out. It is so essential that civilisations have spent the last two centuries perfecting its design and function, from the primitive steam locomotives to bullet trains that look like they might even be able to fly.

Before I even elaborate on the railways situation in Ghana as it stands, let me offer the requisite context with which you can truly appreciate the paragraphs that consequently follow. Let’s stick to the facts. This is an opinion piece.

Think of how easily accessible Kumasi, Tamale and the Northern half of Ghana is now; one flight away. My BDM proposed at the Mole National Park one weekend and was at the Tema office first thing Monday morning. The reach of our brand #RonnieIsEverywhere exploded when we started saying “if you’ll pay for the plane ticket Ronnie will come”. On my WhatsApp status, one friend of mine flaunted her passport standing by a plane. I asked if she’s travelling and she said, “it’s Kumasi, I’ll be back in town by nightfall, it’s not like I’m travelling biaaa.” Ayooo. #WeirdFlexButOk. You see, I still remember a time when going from Accra to Kumasi was “travelling”. And no, I am not that old.

Now think goods, lots of goods, goods that can neither enter nor fit into one STC bus. Think heavy machinery. Think even the automobile spare parts market, Abossey Okai. Think thousands of Ghanaian youth that cannot regularly afford flights or even STC bus tickets on their income. And think of how an easy but far cheaper connection between Northern Ghana and the South (and left and right and centre and behind) can affect many parts of Ghana’s economy. Be business-minded. Think outside Greater-Accra. Think trade. Think new customers, new clientele. Think human resource. Think additional thinktank. Think of YOU as an entrepreneur and what you can do with this.

This is why when I read some time ago that Ghana is set to revive its railways industry budgeting $21 billion (with a B), I screamed “YES!!!!”. It will take some time to complete BUT IT WILL HAPPEN. When it does, it will be open season for those that can see how it connects whole new markets within about half of the nation with the other half, and how it betters many existing ones.

Context is now complete. Let’s dive in. I’ll stick to the facts. This is an opinion piece.

It’s been nearly 120 years since our British colonialists constructed the first railway lines. The colonial infrastructure made over a century ago helped shape the economic geography of Ghana. As a British colony, Ghana (then known as the Gold Coast) was developed by Europeans for Europeans. At the time, railways were considered the best mode of transportation. How else could that many produce and minerals be transported way back then. STC was not in service.

The railway system of Ghana began in 1898 under the Gold Coast Civil Service, with its headquarters at Sekondi. But after the construction of the Takoradi Harbour, it was transferred to Takoradi. The purpose of the railroad was to transport minerals and crops from the mainland to the harbour, which were then shipped to Europe.

Two railway lines, built by the British in 1898-1918, were primarily established for military domination against natives or other colonial powers. But the railway also supported the extensive extraction of precious minerals and cash crop agriculture.

The first railroad, the Western line, linked the coastal town of Sekondi with the gold-rich enclaves of Obuasi and Tarkwa. It was then extended to the hinterland city of Kumasi for military domination. Mining required the transportation of heavy machinery, large quantities of firewood (or coal), and labourers from other regions. European mining companies reaped benefits through this railway system of precious minerals such as gold, bauxite, manganese, and diamonds.

The second, the Eastern line, linked the capital city of Accra to the network through Kumasi, affecting the economic and spatial development of Ghanaians through integration. This railway connectivity strongly affected the production of cash crops such as coffee and cocoa. As soon as the second line opened, farmers decided to use it to transport crops, massively decreasing their transportation costs (aha!).

Fun Fact: The Governorship of William E. Maxwell (1895-97) was instrumental to shaping the railway system back then, because he had previous experience in Malay State where railways were used in tin mines.

In 1919, Sir Gordon Guggisberg was appointed governor of the Gold Coast. He believed that the country was capable of attaining the development levels of Europe. He undertook the advancement and extension of the railway system, built a seaport, and constructed an extensive network of roads. Guggisberg focused on promoting the growth of the economy to give Ghana a competitive advantage in the world market. His policy aimed at rapid development of the country. By the mid-1920s, rail lines covered large portions of the southern part. The expenses accounted for 31.4% of total public expenditure between 1898-1931.

Around 80% of cocoa, the country’s main export commodity, was transported through rail, making Ghana the world’s largest exporter of the crop by 1911. By 1927, cocoa amounted to 80% of Ghana’s exports. By the 1960s, railways transported nearly 2 million tonnes of freight and 8 million passengers a year. This cheaper, convenient mode of transportation was a quicker way to carry more cargo.

The country inherited a functional railway system at the time of independence. But by the mid-1970s, the system began to see a decline due to poor management, lack of maintenance, and the competition from roads. Decades of neglect by post-independence governments have brought the sector down to its knees. As the country developed, people opted in favor of road travel and others. Currently, only about 13% of Ghana’s original networks are operational, and I use the word “operational” very conservatively.

Countries all over the world recognize the importance of an effective railway system. Ghana is not unaware of its inherent value. Railroads have the potential to positively impact transportation, income, infrastructure, development, productivity and trade. An efficient network can contribute to intercontinental and international trade creating massive macroeconomic implications.

With 96% of transportation via road, Ghana is consuming a lot of fuel per person. Trains can diminish the costs of transportation for both people and goods, making commodities cheaper. Trains can reduce poverty by connecting villages, integrating the labour force and goods markets, as well as providing more opportunities to the citizens. An expansive route can help farmers obtain higher profits with the help of acquiring cheaper agricultural necessities. And it can help prevent food wastage when harvest cannot be transported to markets in time. These significant gains can be obtained from market integration by connecting areas through the railroad.

Railway lines will reduce transportation costs of many production businesses, making export markets profitable. More farmers and other investors will be willing to invest in crop cultivation, a labour-intensive field. As a result, crop-producing villages will experience rural growth and urbanization, soon transforming into trading towns with railway stations.

The government plans to invite developers and diversify funding sources for construction. In July 2017 the Ghana Railway Development Authority signed an MoU with a Russian railway company Geoservice to build a 947-km line from Accra to Paga and other routes on a build-operate-transfer basis. Also, a plan backed with a China Exim Bank loan to connect Kumasi to the north was reported in July 2018. This “central spine” will open up the economic corridor with the rest of Africa.

However, the most significant agreement was signed in mid-2017, a $19bn deal with China. Ghana will give China 5% or less of its bauxite reserves in exchange for a variety of infrastructure projects that includes railways network expansion, bridges, new roads, etc. Ghana has 960m tonnes of bauxite resources, valued at $460bn.

Ghana has also signed a $3bn deal with South Africa in November 2018, the famous Accra Sky Train Project. I found such a project as an excellent example of intra-Africa co-operation towards development of Africa by Africans.

Connecting Kumasi to Paga, amongst other endeavours by the Ministry of Railways Development, will be a major feat, greatly reducing traveling time and keeping urban migration in check. However, $70.7 million will be spent on compensating people whose properties will be affected, and rightly so.

The price of getting Ghana’s railway network back to normal functionality is big. What IS “normal” in this case? What standards have we set for ourselves? If we’re to take from Minister , Hon. Joe Ghartey, standards are quite high, and optimism is at its peak. Still, many are skeptical of the future. As with all things Africa, proper management is paramount. Nonetheless, I for one am pretty excited about the notion of having a local railways system matching the functionality and reliability of those in the developed countries. You should be excited as well.

This has been an opinion piece. 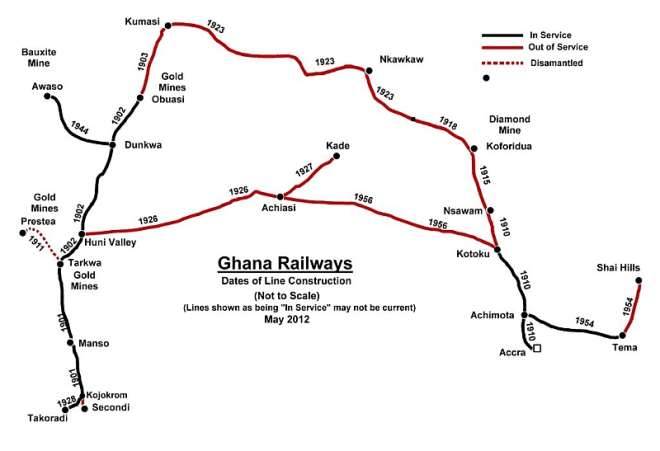