NPP Members Warn NDC MP: "Bring Back Our Ambulance Or Face Our Wrath" 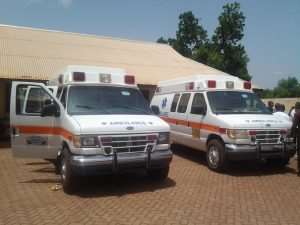 Members of the New Patriotic Party (NPP) in the Larabanga Electoral Area have issued strong warnings to the member of parliament for the Damongo Constituency over an alleged missing ambulance in the area.

According to the NPP Coordinator for the electoral area, the Member of Parliament for the constituency Hon. Adam Mutawakilu donated an old ambulance for the Larabanga Health Center during the 2016 election campaign to win their votes.

Iddi Adam Osman said the ambulance broke down after working for just three months which the MP took it for maintenance but has not returned it since 2017.

He alleged the ambulance is in Tamale carrying passengers while the people of Larabanga live in shock over the long disappearance of the ambulance.

However, assembly member for the area, Hon. Karim said the MP promised to return the ambulance on March 6 but failed and postponed it to Monday.

Hon. Karim retorted that the MP bought the ambulance for the health center with his own money and not from the MP's Common Fund as probated by the NPP members for the area.

The assembly member further stated it is for this reason that Hon. Adam Mutawakilu has taken the ambulance for maintenance.

But the NPP Coordinator said the NPP Members of the Larabanga Electoral Area are giving the MP a two days ultimatum to return the ambulance or they will demonstrate on the streets Damongo, the district capital.