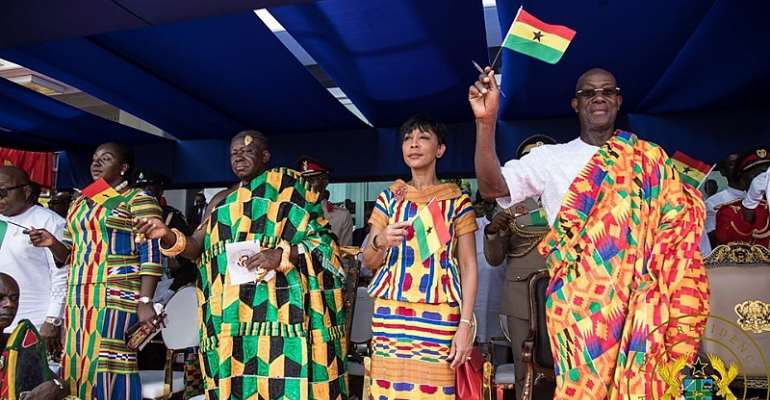 Old wag: "Eeiii, Kofi, did you see the abomination committed by the Ghana Armed Forces at the Baba Yara Stadium, at the tail end of the event held there to mark Ghana's 63rd Independence Day anniversary celebration in Kumasi?

Old Wag: The question is: How could the Military High Command allow the honour of the Ghana Armed Forces to be prostituted by doffing hats to honour a private citizen, who even though an important man in Ghanaian society, simply isn't of the same rank as the Commander-In-Chief of the Ghana Armed Forces, and therefore does not qualify for such an honour from the military, which traditionally reserves their hip-hip-hip-hoorays for Ghana's President, only? Haaba."

Well, my response to that, is simply that on a purely human level, I, like most Ghanaians, admire and respect the Asantehene tremendously, for his attempts at empowering Asanteman, and for he is willingness to do all he can to help keep Ghana stable and peaceful. One way of doing that is to stop those who deliberately fly a tricolor flag that is said to be the Asanteman flag, in public.

If we frown on the Western Togoland secessionists' flag being flown in public, then with respect, we must not tolerate any tribal-flag anywhere in the public space across our homeland Ghana. Full stop. Who born dog, Massa? Haaba.

Old wag: "Yes, I too admire and respect him, Kofi; but let us be brutally frank, he is neither a sovereign, nor the head of state of an independent kingdom: and he will be the first to admit that. Full stop. The Military High Command must stop this descent down the slippery slope to tribalism. If some of us had our way, they would all be stripped of their ranks, reduced to privates, and dismissed from the Ghana Armed Forces for that outrage. Who born dog, Massa?"

My response: Well, I think that that was an unfortunate occurrence, but it is the Defence Minister, Hon. Nitiwul, who must carry the can, and be dismissed for that abomination. In any case, this is not a regime that understands the importance of not bringing tribalism into our security agencies: because it eats breathes and drinks tribalism - Akan tribal supremacy. I know that because that indeed is the secret agenda of the New Patriotic Party ( NPP).

Old wag: "And as for the buffoon who wrote the president's speech today why did he bury his head in the sand so, and give that long and absurd list of those who apparently should be praised for helping Ghana to attain her independence from British colonial rule in 1957, just to make it appear as if Nkrumah was one of many such politicians - when Nkrumah's role was pivotal, Massa?"

My response: Massa doesn't pay to burn your energy and lose sleep over such nonsense. Virtually all members of the Black race worldwide know and recognise that Nkrumah is Ghana's founder, not Dr. J. B. Danquah and his narrow-minded associates - wealthy and clever men who had no time to waste crisscrossing the Gold Coast when they had good money to make: and therefore opted to heed Ako Adjei's advice that Nkrumah be brought back to the Gold Coast, from the UK, to come and do monkey-de-work-baboon-dey-chop nationwide campaigning for them, to enable them take over from the British colonialists, at the appropriate time, and lord it over ordinary people. No amount of mean-spirited revisionism will stop the Black race worldwide from continuing to regard Nkrumah was Ghana's founder. That is why Nkrumah is in the Pantheon of the 20th century's greatest leaders - and Dr J. B. Danquah isn't. Full stop. Who born dog, Massa? Haaba.