We May Be Off to a Good Start in Sogakope Murder 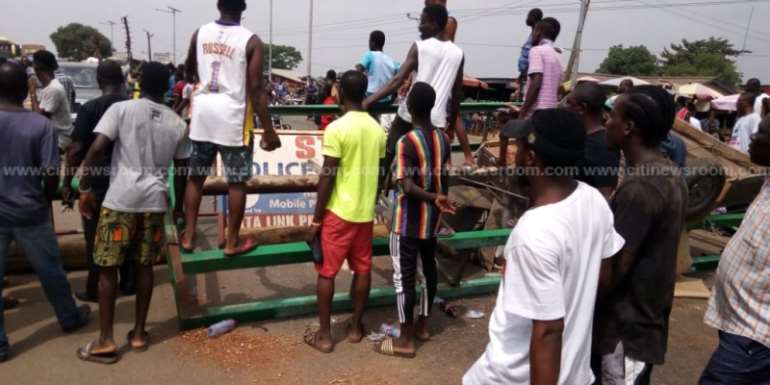 In the wake of the brutal – some say, barbaric – murder of a young Sogakope, Volta Region, Assemblyman by the name of Marcus Mawutor Adzahli, reportedly shot and stabbed to death at his private residence in what clearly appears to have been an armed robbery, both the family of the deceased man, whose age was not given, and some politicians continue to express acute dissatisfaction with the manner in which the Sogakope police personnel responded to the crime scene. We are informed that some family members and some kinsmen and women of the dead man have bitterly complained to the members of a delegation of the Volta Region’s largely National Democratic Congress’ Parliamentary Caucus that visited them that, if the Sogakope police had promptly responded to calls for help while the crime was in progress, Mr. Adzahli might possibly have survived (See “NDC Places GHȻ 30K Bounty on Killers of Sogakope Assemblyman” Starrfmonline.com / Ghanaweb.com 3/5/20).

This aspect of the allegedly slow response to the crime by the personnel of the Sogakope police may very well have something significant to do with logistics; but it could as well significantly have a lot to do with the level and caliber of the forensics training, generally, provided to personnel of the Ghana Police Service. We are told, for instance, that not only was the response time of the Sogakope police to the crime scene not very professionally encouraging but, as well, adequate measures do not seem to have been taken to cordon off or protect the crime scene. On the latter count, however, we do not have any reliable evidence to enable us to draw any credible conclusions, as this judgment call seems to have been primarily based on complaints allegedly retailed by the relatives and family members of the deceased to Mr. Emmanuel Kwesi Bedzrah, Chairperson of the Volta Region’s Parliamentary Caucus, who led the delegation that visited both the family of the deceased as well as the Volta Regional Division Commander of the Ghana Police Service and the Sogakope District Chief Executive (DCE).

It is equally significant to note here, in retrospect, that the same high level of political involvement had not been precipitated by the brutal point-blank shooting assassination of Mr. Peter Kenyenso, extant DCE of Nkwanta-South, presently part of the newly created Oti Region some five years ago. In that incident, I don’t recall the National Democratic Congress’ Parliamentary Caucus, then a part of the ruling John Dramani Mahama-led government, plunk down any monetary bounty for the provider of any reliable leads that culminated in the arrest and successful prosecution of the suspects involved. To be certain, the leaders of the National Democratic Congress (NDC) went about their normal duties, barely a couple of weeks after the Kenyenso murder, almost as if the slain Nkwanta-South’s District Chief Executive Officer had never even existed. Dr. Edward Kofi Omane-Boamah, the extant Mahama Communications Minister, would rudely and literally tell the now-President Addo Dankwa Akufo-Addo, Ghana’s main Opposition Leader at the time, to “Go to Hell!” when the former Attorney-General and Minister of Justice demanded that the Mahama government update Ghanaians on the progress of investigations pertaining to the apparent contract assassination of Mr. Kenyenso.

The official response to the Adzahli Murder Case has been unusually and exemplarily encouraging. For example, well before the Volta Region’s Parliamentary Caucus posted a GHȻ 30,000 bounty award to the provider of any reliable leads that might lead to the arrest of the suspects of the Sogakope Assemblyman’s brutal slaying, former President Jerry John Rawlings had already reportedly posted a GHȻ 25,000 bounty award to the provider of any leads culminating in the arrest and prosecution of the killers of Mr. Adzahli. Earlier on, the members of the NDC’s Volta Region’s Parliamentary Caucus had reportedly placed a bounty of GHȻ 15,000 award to the provider of any leads resulting in the apprehension and prosecution of the prime suspects (See “3 Arrested in Connection with Murder of Sogakope Assembly Member” PrimeNewsGhana.com / Ghanaweb.com 3/5/20). It well appears that it was the quite decent posting of the GHȻ 25,000 bounty award by the founding father of the National Democratic Congress that possibly shamed the Bedzrah and Okudzeto-Ablakwa Gang into doubling its original miserly bounty award of GHȻ 15,000.

But, of course, we also need to promptly highlight the fact that Mr. Rawlings may not have posted his quite decent bounty totally out of disinterest or the sheer determination to ensure that justice is swiftly brought to bear on the pates of the criminal suspects. For those of our readers who may not be aware of this, Sogakope is widely known to be the maternal home village of the former Flight-Lieutenant of the Ghana Airforce (GA). So in a practical sense of the dictum, in posting such a decent bounty on the heads of the killers of Mr. Adzahli, Chairman Rawlings was only concurring with the imperative need for “Charity to begin at Home.” Ultimately, however, a remarkable part of the credit ought to be ceded to President Addo Dankwa Akufo-Addo who clearly appears to have induced a healthy climate of urgency on the part of Ghanaian leaders towards heinous and hideous acts of barbarism as that which scandalously took the lives of Mr. Joseph Boakye Danquah-Adu, at the time of his brutal bedroom-stabbing assassination the New Patriotic Party’s Member of Parliament for Akyem-abuakwa-North and a cousin to President Akufo-Addo, at the time, the main challenger of then-President John Dramani Mahama; and, of course, Messrs. Kenyenso and Adams Mahama, then Upper-East Regional Chairman of the extant opposition New Patriotic Party.

Now, what remains to be done in order to fully restore the confidence of patriotic and law-abiding Ghanaian citizens is the imperative need for the radical reconfiguration or reconstitution of a credible and well-respected judicial system whose key operatives are both resolute and fearless in their ministration of justice. And here, too, fortunately, it well appears that President Akufo-Addo is assuredly on course.