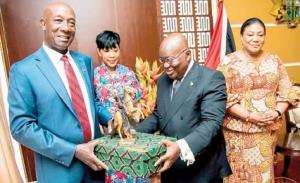 Trinidad and Tobago has pledged its readiness to partner Ghana in the oil and gas sector.

The Prime Minister of the Trinidad and Tobago, Dr Keith Christopher Rowley who made this known during the 63rd independence anniversary of Ghana in Kumasi on Friday also said his country was prepared to support Ghana in its energy and agricultural sectors.