Liberia: An Urgent Call By CJL For Justice And Accountability 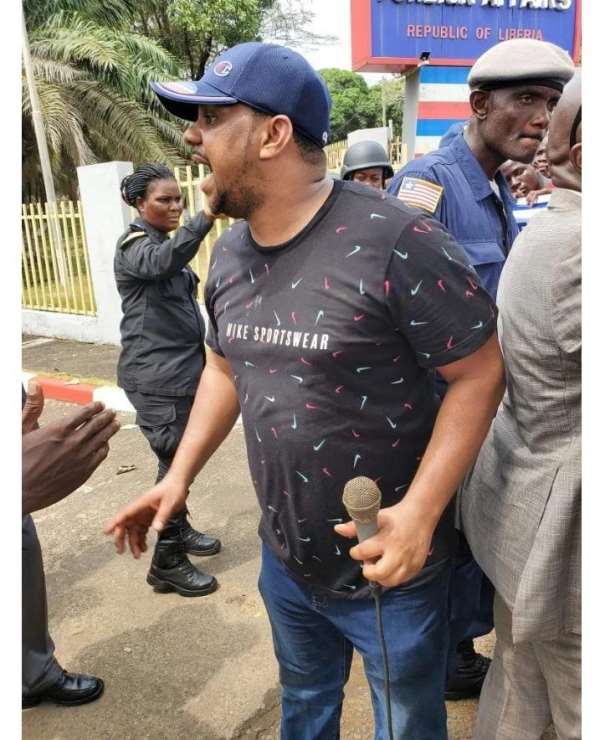 The Coalition for Justice in Liberia (CJL) condemned in the strongest terms the arbitrary harassment, arrest, detention, and tortured of Mr. Emmanuel Savice, one of the lead campaigners for the establishment of an internationally-backed war and economic crimes court on Liberia.

On Tuesday, March 3, 2020, Mr. Savice was humiliated, intimidated, beaten, tortured and detained during a peaceful protest staged at the Capitol Building in Monrovia and to President George Manneh Weah in support of the establishment of war and economic crimes court. We the leaders and members of the Coalition for Justice in Liberia, comprised of the Liberians United for Justice and Accountability(LUJA) and other human rights organizations, are calling on the George Weah government to immediately, arrest, investigate and bring to justice members of state security forces linked to this barbaric, thuggish, and undemocratic behavior.

The harassment, intimidation, torture, and murder of human rights campaigners have become more frequent under the George Weah government. In early January this year, protestors led by Mr. Henry P. Costa and the Council of Patriots were violently chased from the streets of Monrovia by members of the Weah’s government security forces under the command of some of the alleged notorious war criminals responsible for horrific crimes during the 14 years dreadful upheavals in Liberia from December 24, 1989- August 18, 2003.

Instead of facing justice for their crimes, the Weah government has emboldened the hardened criminals by appointing them to the position of trust and national security. We categorically object to the appointment of Augustine Nagbe, AKA General Powers and others, including the notorious war criminal “Khadaffi” serving in the ranks and files of the Weah government security apparatus.

We are calling on ECOWAS, AU, UN, EU, the government of China, Canada, the United States, Britain, India, and other peace-loving institutions and nations to join us in condemning the Weah government’s undemocratic human rights records by calling on the government to immediately suspend and prosecute all those responsible for these acts of banditry and demand the establishment of war and economic crimes court in Liberia to provide an opportunity for all those accused of war and economic crimes to adjudicate their innocence or guilt. The court will also provide an opportunity for Liberian war victims to seek redress thus, bringing a closure to the 14 years calamities in Liberia.

Background
Pursuant to the Powers and Authority of the Liberian Truth and Reconciliation Commission(TRC) as enshrined in VII Section 26(a)(b)(c)(d)(e) of the TRC Act of (2005) to address issues of impunity and to ensure “accountability, political or otherwise” for violations of human rights during the period 1979-2003, the TRC Commissioners recommended forty-nine ( 49) individuals including former President Ellen Johnson Sirleaf for lustrations and debarment from holding public office in Liberia for thirty (30) years and possible criminal prosecution.

According to the TRC report page 360-361, these individuals including Mr. Charles Taylor, the leader of the defunct National Patriotic Front of Liberia (NPFL), Senator Prince Y. Johnson, the former leader of defunct Independent National Patriotic Front of Liberia (INPFL), Representative George Boley, leader of the defunct Liberian Peace Council (LPC), including others.

After many years of crimes, impunity, and uncertainty, the UN-backed internationally- supported specialized War Crimes Court on Sierra Leone presided over by Judge Richard Lussick, convicted former President Charles G. Taylor, the leader of the NPFL and sentenced him to prison for 50 years for aiding and abetting war crimes and crimes against humanity committed in Sierra Leone but not Liberia.

Instead of implementing the Liberian TRC recommendations, successive Liberian governments from Madam Ellen Johnson Sirleaf and now George Weah maliciously buried the report and echoed a mantra of “development over accountability.” Regrettably, dismal reports including the 2011 illegal sale of Liberia ambassadorship to an undercover Danish journalist, Mr. Mads Brügger Corazon for US$150,000.00 by the Chairman of the former ruling party, current Senator Varney Sherman, of Grand Cape Mount County on which the “Ambassador” documentary film is based; the illegal sale of 60% of Liberia’s land and forests to fraudulent logging companies reported by Global Witness; the $100 million disappearance scandals under the watchful eyes of the Weah government; the $25 million scandal at the ministry of finance and many other cases of corruption, human rights violations, disappearance, and the suppression of freedom of press, once more underscores the miserable failure of the unwise, hopeless, and uncontrollable appeasement policy in Liberia which has further reduced Liberia into a failed state governed by thugs.

Conclusion
We believe that the current atmosphere of relative peace and security in Liberia is unsustainable without confronting the cardinal problem of impunity in Liberia. Given the analysis of the regression of democratic tenets in Liberia, we urge the international community and friends of Liberia to divert any support to the Liberian government to the establishment of the economic and war crimes court in Liberia. Without confronting the question of impunity and accountability, it will sooner or later become once more a menace to the sub-region: A sad repeat of the 1990 scenario in which untold violence spread from Liberia through Sierra Leone and Guinea.