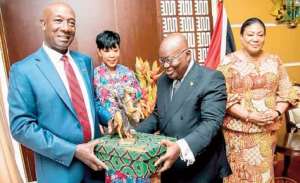 His visit is at the invitation of President Akufo-Addo as special guest of honour for the national celebration scheduled to take place today in the Ashanti Regional capital, Kumasi.

It is the second time the anniversary is being celebrated out of the capital, Accra; the first being in the Northern Regional capital, Tamale, in 2019.

Upon arrival, the Prime Minister paid a courtesy call on President Akufo-Addo at the Jubilee House during which the two discussed issues of mutual interest among them – the Air Services Agreement (ASA) between Ghana and the Caribbean region.

This is expected to restore direct flights from the Trinidadian capital, Port of Spain, to Accra, as it existed during the Ghana Airways era.

“Once we establish a mutual Air Services Agreement and establish direct air service between the Caribbean and Africa, we believe that there is tremendous potential there for economic growth, for businesses to flourish, taxes to be made, investments to be made and for recreational purposes,” Rowley emphasised.

To this end, he said Trinidad is anxiously waiting for Ghana to revive its national carrier, and certainly the Port of Spain and Accra will be established.

Keith Rowley raised the issue about food security which he said was a major concern as far as the Caribbean and Africa are concerned.

He bemoaned the over dependence of sub-Saharan Africa and the Caribbean on goods and services from the Northern hemisphere of the world, adding that it is time for Ghana and Trinidad to partner in the area of agriculture in order to guarantee food security for their peoples, the African continent and the Caribbean as a whole.

President Akufo-Addo agreed to the need to restore the Air Services Agreement between their respective countries, saying “it is the one major gap in the architecture between our two countries and our two regions; going to London before coming here, really, there is no need for that…”