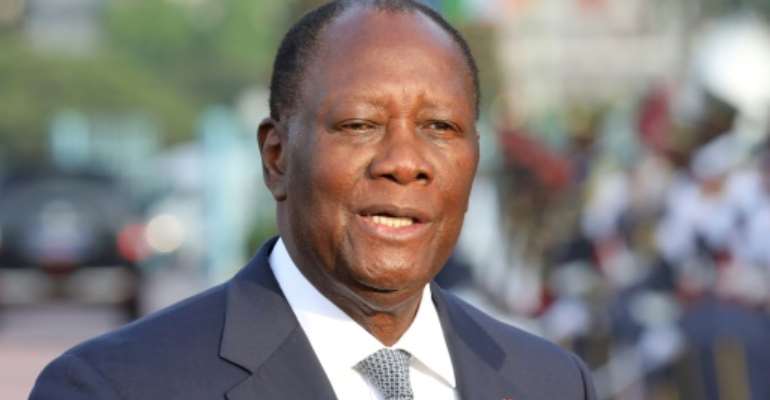 Ivory Coast President Alassane Ouattara said on Thursday he would not run in October's election, ending months of speculation over whether he would seek a third term.

October's presidential election looms as a major challenge for the West African country after its 2010 vote ended in violence between political rivals that killed 3,000 people.

"I would like to solemnly announce that I will not be a candidate in the October 31, 2020 presidential election and I will transfer power to the younger generation," Ouattara said in a speech to Congress.

Ouattara, first elected in 2010 and then re-elected in 2015, had kept Ivorians guessing over his political future, saying last year that he could run again if his traditional rivals were candidates.

Ouattara in 2011 ousted the then-president, Laurent Gbagbo, who refused to step down after losing elections in a standoff that triggered violent street clashes.

The constitution allows only two presidential terms, but Ouattara, 78, had claimed he would be able to stand due to a constitutional change in 2016 -- a claim vehemently denied by the country's opposition.

In January he announced unspecified "modifications" to the constitution, leading to two months of rumours of a possible power grab, or a presidential age restriction in a theorised bid to sideline opposition leaders.

Ouattara's announcement to Congress, which followed a 30-minute state of the nation address, was met with thunderous applause from lawmakers as well hundreds of students invited to attend the speech.

"Thank you! Thank you!" the students chanted.

In his speech, Ouattara sought to project the image of a steady hand during turbulent times who helped make Ivory Coast the top economic performer in West Africa.

The US-trained economist, known as "Ado" after his initials, said he inherited a country "in tatters" and "brought peace and security".

He said that 80 percent of the population now has drinking water, compared to 55 percent when he took office in 2011.

"I certainly did not succeed in everything, but the results are there... I gave my best," he said, also pointing to the many roads, bridges, schools and hospitals built during his tenure.

Post-graduate student Daouda Bakayoko said he is "happy that (Ouattara) is giving way to the younger generation".

"He is a man of his word. I am proud of my president even if I am not one of his supporters," Bakayoko said in the capital Yamoussoukro.

Ouattara's announcement to Congress, which followed a 30-minute state of the nation address, was met with thunderous applause from lawmakers. By Sia KAMBOU (AFP)

"It is a good decision which allows President Ouattara to end his political career with his head held high," said Pascal Affi Nguessan, who served as prime minister under Gbagbo.

Bedie, who will be 86 during the October election, has not ruled out running.

After Ouattara's announcement, an MP from Bedie's Ivorian Democratic Party (PDCI), Veronique Aka, said the president had "freed everyone".

"You have to know when to let go," she said.

Gbagbo will be 74 for the vote, but whether or not he will be able to run likely rests in the hands of the International Criminal Court.

He was arrested in 2011 over the violence that followed his refusal to step down, but was cleared of crimes against humanity last year.

Currently staying in Belgium under strict conditions ahead of a prosecution appeal, Gbagbo has requested his unconditional release but the court has yet to rule.

The political climate has been tense in the run-up to this year's vote, following municipal and regional elections in 2018 that were marked by violence and fraud allegations.

Former prime minister Guillaume Soro, a longtime Ouattara ally who has fallen out of favour, is currently the only person to have declared as a presidential candidate.

But Soro has been accused of plotting an anti-government uprising -- a claim he denies -- and is living in France under threat of an arrest warrant at home.

Deputy government spokesman Mamadou Toure said the president's decision was "also a lesson for the entire Ivorian political class: you must know when to walk away".

"It is a message that will echo across the African continent."