Towards A Zombie Apocalypse: Building A National Cathedral Is A Pius Fraud 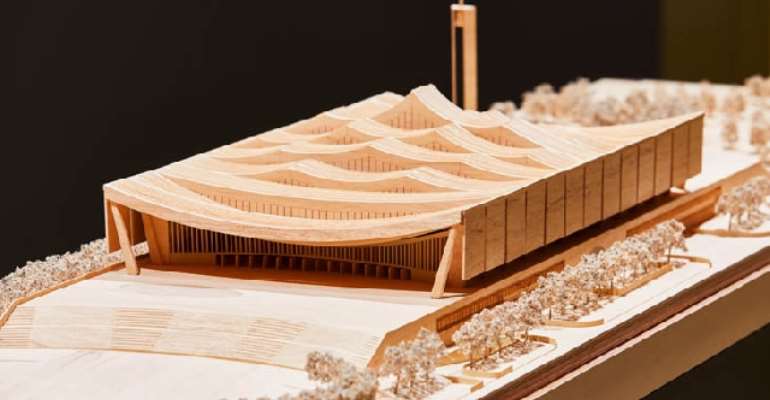 I am an absolute believer that Church and State must be as separate as reason and belief. Anyone who mixes reason and belief is totally and utterly confused in my books. And confused people have no business running a state, especially not an underdeveloped state like Ghana that needs to think its way out of poverty, disease, ignorance, and underdevelopment.

Obviously, what our leaders are attempting to do is to encourage we those on this side of heaven to pray our way out of poverty – forgetting that heaven only helps those who help themselves - according to the same Christian Theology.

In my several years of studying and practicing Christianity, I have never read or heard that heaven helps those who pray in monumental buildings. And even though building a Big church in the name of the people may appear a good thing, it is important to remember that fraud can be covered by piety.

If even we were a Christian nation – which we are not – we still need to develop based on reasonable approaches and not otherwise. The proponents of this wasteful and fraudulent idea of a national cathedral will quickly shout that I be ignored because this article is based on HUMAN REASON. And they may add that I am taking this position because I am not born again.

The more blinded ones will say that some of us are taking this position because we are NDC. Say what ever you want. I am writing what I think and what I like. Everyone is entitled to their opinion when we debate democracy.

I don't want to be born again to lose my reason and common sense. Don't let them confuse you with all these obfuscating terms like mystery or miracles or prophesy or born-again. There is nothing mystical about practicing the moral truth and goodness of the God we believe in. That is what religion or more specifically, Christianity is all about. And there is nothing like human reason.

No human created reason. God created reason and it is indeed only REASON that can make us believe in the God of creation. I don't see how any one can believe in God without using his reason. And if you ask me, the only reason they bring up their mystries and miracles and prophesies is for the sole purpose of covering up the MORAL TRUTH and goodness of the God in whose name they are attempting, under false pretense, to profit from.

Let's look at their most 'reasonable argument' for the decision to pull down several state buildings in replacement of this needless cathederal. The proponents – President Akufo Addo, some of his NPP supporters, members of government and the followers and believers in the Christian Council of Ghana – argue that this building will not cost the tax payer a penny. This is a very bogus argument only for the buying of those who refuse the use of their reason.

The President's precious time is the tax payer's money. We didnt elect a President with all the powers and resources at his dispossal to waste it on populists attempts to please segments of our society. Plus, who owns the vast lands and buildings to be demolished for this project? We-the-people. Therefore, that argument turns logic and reason upside down.

Secondly they argue that an independent committee of church leaders are going to raise the funds needed for the construction of the edifice. Indeed, that committee was set up two years ago and is headed by Duncan Williams, one of the leaders of the Charismatic and money making churches in Ghana.

In an announcement to his congregation after the inauguration of the committee, Mr. Duncan Williams said the following:

Duncan-Williams the so-called man of God added, “I need some of your secret monies… Some of you, your savings, you are going to Dubai and Europe for [holidays]. Give us that money to build the national cathedral. One day, you and your loved ones and your children’s children may use there. One day one of your sons or daughters will be President of Ghana and shall benefit from that thing”.

Very amusing coming from Duncan-Williams. Are these part of his prophesies? No wonder the prophets of the bible were poets and entertainers. Obviously, he expects 'Everybody' in his congregation and Ghanaians not to use our REASON otherwise he will not come up with this bogus statement.

I will like to pose the following questions to Duncan Williams and his supporters or those who think like him.

How will future Presidents benefit from a cathederal? Is the salvation of his congregation in a monumental building? Where in the social gospel of Jesus Christ did he ask that we spend scarce money on monuments as part of imitating the moral goodness of God?

The Church in Ghana is hiding behind a victim-President Nana Akufo Addo to defraud we-the-people. And the leaders including those of the church are definately not thinking about the future in scientific and technological terms like other civilised societies are currently doing.

I don't expect a response from Duncan Williams or Rev. Ismael Tetteh who said that ''if a million buildings must be pulled down to put up a national cathedral, it must be done''. These are religious charlatans who don't speak to reason but i await the lame responses from their blind followers.

Look – Jesus Christ was a foremost Philanthropist. He lived a frugal lifestle. He forebade trading in Church. He was all about the poor and meek.

Everything about the building of the national Cathedral in Ghana goes contrary to the teaching of the Christ they claim to be following. This needless endeavour diverts masssive national resources, time and mental energy away from helping develop and uplifting the poor.

This so-called LEGACY CATHEDERAL will not please Jesus Christ because it will take away food from the table of the poor. It will only please people who have replaced their God-created REASON with mere belief. I say this without apology. The only purpose will be in memory of leaders in their twilight zones who are preoccupied with thoughts of the after-life.

The majority of th epeople of Ghana are young and poor. Any worthwhile social gospel must be geared towards lifting these youth out of poverty rather than putting up an expensive building that 'our children's children can use' like Duncan Williams is fraudulently claiming.

Elsewhere in developed societies,church buildings are being converted into museums and tourists attractions to earn revenue to take care of their health, educational and environmental systems. And we sit in this poor side of heaven doing the opposit and pretending that we are learning from the developed societies. We have a long way to go in terms of our learning.

In the whole CREATION which encompasses the beneficence and moral goodness of God – which man is called upon to imitate by the way – God did NOT create a Church. The Church is entirely the idea of man.

Therefore if our President and his 'Evengelical Christian supporters' including Duncan Williams, Ismael Tetteh and the rest want to build a CATHEDRAL, let them go ahead without calling it a NATIONAL CATHEDRAL or anything to bring the blessings of God to Ghana. We know it is not true. At least, we those who use our reason do know it. We are tired of the leaderlessness!

But if you want to know that Ghana is truly heading towards a zombie apocalypse just pay attention to the number of young miseducated people clamouring and rooting for the President and his NPP government's wasteful expenditure on a national cathedral in the midst of lack of education, poor sanitation, bad roads, broken health system, high child and maternal mortality rates among the masses.

More Feature Article
ModernGhana Links
From Nowhere to Somewhere
The duopoly will loot for 30 more years.
Cheap Grace and Climate Change: Australia and COP26
Does President Nana Akufo-Addo approve of the illegal methods in use to confirm Samuel Addai Agyekum as Kumawu Sekyere District Chief Executive?
Has America retreated (!) or redeployed tactically in Afghanistan?
Protect your life or get killed
John Dramani Mahama: a man to learn from mistakes?
Shcribbling And Shmiling (2)
I will never fight for an African leader but for my beloved Ghana
TOP STORIES