The World Watches In Awe… Coronavirus 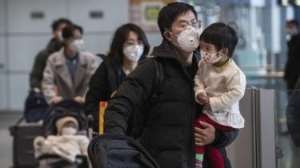 “It is not so much a question of if this

will happen anymore but rather more of a question

of exactly when this will happen.”

for themselves to eat or give as presents

because it is very presentable and gives

An advert by WOW Dogs

There appears to be no love lost between Americans and Chinese. In 1854, the New York Daily Tribune described the Chinese as “uncivilized, unclean, filthy beyond all conception”. Now, with the emergence of the coronavirus, traced to Wuhan, the old narrative is being rehashed. You could call them 'conspiracy theories' with someone eating whole live mice spiced with some sauce; and a teenager to a supermarket openly picking a toad and eating it raw. But Chinese civilization dates as far back as the Xia dynasty of 2070-1600 BC or 1250 BC with the Shang dynasty and the Zhou dynasty. In 551, BC Kong Qiu, more famously known as Confucius, was born. His teachings are preserved in Analects. The man who initiated the “Golden Rule”: “Do not do unto others what you do not want done to yourself”, had a lot of admonition on culinary practices: “Food should be served on small or chopped pieces; the taste of any dish depends on proper mixing of all its ingredients and condiments; eat only at meal times; don't eat food that smells bad; don't consume food that is not well cooked; eat fresh and local… know the origin or source of your food; consume ginger sparingly in order not to overheat he internal systems… meat should be eaten in moderation; you need not limit drinking, but do not drink to the point of confusion; hygiene is essential in food preparation.

But the coronavirus crisis is on. In Latin, 'corona' means 'crown' or 'halo' referring to the characteristic appearance of the particles (virions). The scientific name is 'orthocoronavirinae', belonging to the family of 'coronaviridae'. Coronavirus in human causes respiratory tract infections (common cold) OR the rarer forms like SARS, MERS, COVID-19. It is spread by respiratory droplets which are generated by sneezing and coughing.

Is it an 'epidemic' or a 'pandemic'? WHO is hesitant about calling it a pandemic because it believes it can be contained, and also in order not to create panic. Epidemic is broadly used to describe a disease that has grown out of control. Pandemic relates to geographical spread and is used to describe that which affects a whole country or the entire world. You may be interested to learn that 'sporadic' diseases occur infrequently and irregularly; 'endemic' diseases have a constant or usual presence in an area; 'hyperendemic' diseases are prevalent at high levels, well above what is seen in other population.

Historical records show that the Plague of Justinian (541AD) afflicting the Byzantine Empire, especially the capital Constantinople, was the bubonic (swollen, inflamed lymph nodes in the groin) plague of North East Europe that killed more than 75 million people from 1347 to 1351; the Spanish flu pandemic of 1918 killed over 50 million people, spread by the returning WW1 soldiers ; the small-pox pandemic killed 300-500 million people (It is the only human disease that has been eradicated); the tuberculosis pandemic kills 1.5 million people annually; and HIV has killed over 39 million people since its outbreak in 1982; and Ebola traced to Uganda, spread in Liberia, Sierra Leone, Guinea, Mali and Nigeria recorded 30,000 cases and 12,000 deaths; malaria remains the everlasting killer. Of course, if poor hygiene is the cause of the cholera epidemic in London in 1854, credit goes to John Snow for tracing the source to the poor sanitation in the Soho District.

And Arthur Kennedy, Kennedy shares ideas with us from South Carolina, U.S.A. He advises us to be wary of false impressions and false information. The coronavirus is like the flu and very contagious. People suspected to have travelled from infected places like China, Italy may have to be screened and quarantined for about 14 days. Of the 9,000 or so cases, there have been 3,000 deaths and only three cases in Africa. Some think the heat in Africa can kill the viruses. The happy news is that the disease is curable. He was smart to mention the date of his research (02/03/2020), because the figures keep rising every day.

But if you have relations and friends in the U.K., France, Germany, Italy, et cetera, you have to steel yourself to be bombarded with videos about the suspected happenings elsewhere. In France, for example, face masks are out of supply. The pharmacy shops display notices: “Pas de masques” (No masks). The French are gearing up to face the brunt of an epidemic. On a visit to La Pitie Salpetriere Hospital in Paris, where a coronavirus victim died, the President, Mr. Macron noted: “We are facing a crisis, an epidemic that is coming. We know that we're only at the beginning.”

You may have noticed the new style of greeting (in the highly affected areas of the world): people use their feet in 'shaking'. Can that culture be permitted here? At funerals, we have to shake hands with all the mourners to demonstrate our commiseration… any change in that? What about washing of hands? Imagine shaking hands with somebody and immediately thereafter using sanitizer. “Akoayi ye dwee!”all will exclaim. Do we practise these regularly? What about spitting carelessly? Have we stopped the crude habit? (A friend tells me of an episode in which he was in a company of some Chinese at a big-time restaurant at Tema. After consuming some drinks and food (including wonton soup, or huntun tang, Ma potofu and Sichuan shredded chicken with rice piled as a mount), one of the Chine spat on the floor, the other Chinese did not say anything, and he (the friend) did not do anything because he did not want to jeopardize their camaraderie.