From The Frying Pan Into The Fire! 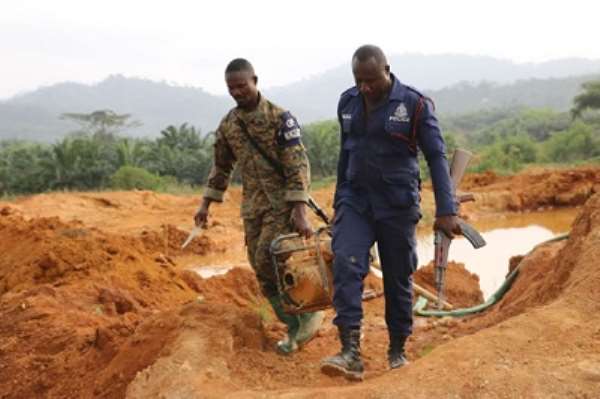 As soon as it was reported that some of the anti-galamsey functions of “Operation Vanguard” were to be transferred to the Ghana Police, someone wrote to comment on the Internet: “From the frying pan into the fire!”

That comment may sound a bit cynical. But it accurately reflects the reputation the Ghana Police Force has cultivated in the eyes of the public it has sworn to serve.

Everyone talks about how corrupt the police are. But we do not hear of anything being done about it. So the public continues to believe that they are corrupt. And the Government wants to end corruption in the campaign to end the destruction of our rivers, streams and water-bodies by galamseyers and it hands over that campaign to the police?

Indeed, aren’t Operation Vanguard personnel already supposed to be composed of BOTH policemen and soldiers? That being so, how could the soldiers in Operation Vanguard have (for instance) made money out of arresting galamseyers; seizing excavators; seizing arms and ammunition; seizing gold; motor vehicles; fuel containers etcetera etcetera, without the police knowing about it? How often have arrested people been allowed by the police to escape? How many excavators have been removed from under the noses of the police? How many enter forest reserves and riverbanks without being arrested by the local police?

When Operation Vanguard was turned into GALAMSTOP, I wrote an article warning that it had become a “hi-tech” operation and that there were risks attached to that modus operandi. This is part of what I wrote at the time: (Ghanaweb 19 August 2018):

QUOTE: “The trouble with galamsey is that it’s like the multi-headed snake in Greek mythology, Hydra of Lerna. Hercules was obliged to slay this monster as one of his Twelve Tasks. But the trouble with the Hydra was that even if you were very good with the sword and managed to cut off one of its heads, it grew two in their place! ….  “The new approach to the galamsey problem announced by the Chairman of the Inter-Ministerial Committee on Illegal Mining, Prof Frimpong-Boateng (Minister for the Environment) at a Meet The Press event on 16 August 2018, was so sophisticated that it created not one Hydra-headed conundrum but several…..  “Prof Frimpong-Boateng and his Committee have developed an ultra-modern and very sophisticated “roadmap” to try and contain galamsey. Whilst presenting it, the Prof again managed to come out with a profound truth which makes the problem a challenge to all Ghanaians, not only to the Government of the day. In answer to a question about the chances of success of the roadmap, he said: “I can give you facts about the situation. But I cannot change your attitude to it.”  “That change in attitude must come from each and every one of us, he suggested…. It reminds me of another statement I once heard, …uttered as a comment on our situation: “We cannot rise above ourselves!” UNQUOTE   Yes, the simple truth is that “We cannot rise above ourselves.” For how can a man who has risen high enough in our society to merit an appointment to high government office, disgrace the President who appointed him, by accepting money to sabotage a programme the President has entrusted to him?

How can an influential man in whom the President had reposed trust, send a convoy of official cars into a galamsey area to tell Operation Vanguard personnel that the people they had just arrested were “his boys” and should therefore be allowed to go free?

How can a Ghanaian person in authority condone the actions of a Chinese woman, in setting guard dogs on Ghanaian uniformed immigration officers, who want to arrest her for carrying out unauthorised activities in relation to galamsey,? And employing other Chinese nationals to behave in the same way, to boot? Would any Ghanaian dare to show such disrespect to uniformed officials of the Chinese state? Would Chinese officials accept money and allow such insolence against their country to go unpunished?

What has happened to us as a nation is that we have ignored President Kwame Nkrumah’s noble objective and made our independence “meaningless.” When Nkrumah told us, on 6 March 1957, that our “independence is meaningless unless it is linked up with the total liberation of the entire African continent”, he wasn’t suggesting that Africans should be “liberated” by riding in nice official cars, living in luxurious bungalows and having traffic stopped for them by police outriders.

What he meant was a change of mentality; such a change as would make no African accept being insulted in his own country as a “Kaffir” (as was the case in apartheid South Africa).

That no African should be denied services anywhere in the world, just because of the colour of his skin; and that when such discrimination occurred against any African in any country, then all other African countries should rise as one and accord similar treatment to the nationals of the racist country that did not respect Africans.

It would never have occurred to President Nkrumah – who spent many years negotiating fair terms for Ghana, in respect of the construction of Akosombo Dam – that the people he had fought for would one day allow foreigners to come and destroy the very water they drank, in exchange for gifts of money.

Yes, what we have truly lost is our SOUL, and unless we regain that, no amount of personnel changes in Operation Vanguard, or Operation-Let-The Police-Do-It, or even by “Asafo” groups, will save us from the effects of galamsey.

In other words, it isn’t the anti-galamsey mechanism that’s gone wrong;

No! It Is the PEOPLE who operate the programmes; the PEOPLE who look around and when they think no-one can see them, stretch out their hands, take money, put it in their pockets, and allow the DESTROYERS to go on using excavators to churn up our riverbeds

and destroy our forest reserves.
Yes – it is our people who should be conscientized into line, to prevent the destruction of our natural endowments.

Otherwise, we shall devise ever-new anti-galamsey programmes – all for nothing!