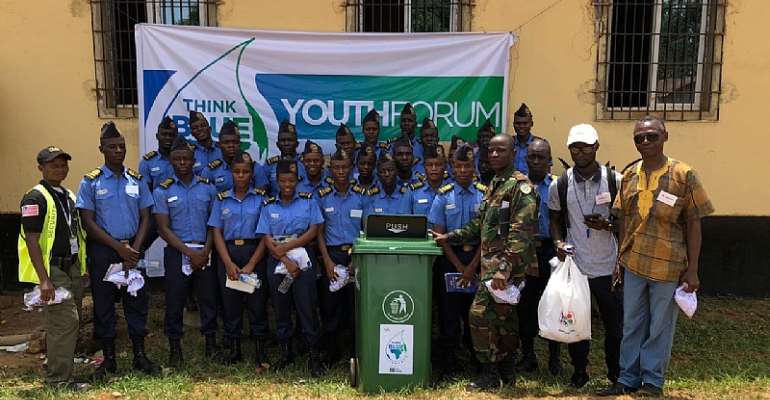 The Think Blue, Live Green awareness campaign for sustainable and clean communities proudly supported by the Embassy of Sweden Monrovia and organized by Miss Boss Lady (MBL) International got underway on the weekend of February 29, 2020 with a one-day youth forum in Marshall City, Margibi County.

The event brought together more than 150 students and youth from the City of Marshall, and the cadets from the Liberia Maritime Training Institute to talk about the significance of our waters, it’s natural and financial resources and the importance of keeping it clean in order for our communities to stay healthy.

The campaign asks everyone to, “think blue, and live green!”

Mr. Donald T. Gwaikolo, a professor from the Liberia Maritime Training Institute (LMTI), informed the students about the relevance of the different aspects of the "Think Blue, Live Green" including thinking blue: blue economy, blue ocean and blue skies; green environment and clean marine ecosystem that Liberia is endowed with.

He said despite the West African nation being blessed with long Coastline unlike its neighbors, little is being done to tap on the economic advantages the country's marine resources hold. "This is because we are not "thinking blue.”

Mr. Gwaikolo indicated that the youth workshop will enlighten young people to begin taking actions that would help them sustainably take care of marine resources and their environment given the fact that Liberia is naturally gifted. "The long Coastline Liberia has is a reservoir of wealth, health and money if utilized," the Instructor added.

According to Mr. Gwaikolo, there are many resources under the ocean that can be mined for the greater good of the country but Liberians are either not interested or aware.

The team leader of MBL Group, Marcelle G. Yhap told participants that the intent of the Think Blue, Live Green initiative is to rally communities on the importance of keeping their surroundings clean since most of the trash is wasted into the ocean; hence causing pollution that result to adverse effects on marine ecosystem and the very communities that created them.

"We want to make sure that Liberia has clean communities especially along the coast. A lot of our resources come from the water. We have fish and port facilities that depend on the water, we depend on water everyday, so we have to think about how we are affecting our waters" she stated.

According to the MBL Group Team leader at the Youth Forum, MBL with support from the Embassy of Sweden in Monrovia is going to various communities across selected coastal areas to educate residents, students and young people about the need to keep their beaches and communities clean.

She disclosed that the team will go to Grand Cape Mount and Grand Bassa Counties to conduct similar forums and beach clean-ups as part of Think Blue, Live Green awareness exercise. Marshall City, she noted, is privileged to be the first place to benefit from the initiative that would go a long way in helping young people to be aware of the danger that pollution poses to the waters around them and the environment.

At the end of the day long event, the Special Assistant to the Mayor of the City of Marshall, McArthur Williams thanked MBL Group for the initiative and Swedish Embassy in Monrovia for the support that provided the young people of the coastal city the opportunity to acquire new knowledge about the management of marine ecosystem and the environment. Two large trash and recycle bins were donated to be used by the Marshall City Hall and to LMTI to store trash for proper disposal.

As a part of the campaign we will be highlighting various companies and organizations who are already doing the work in line with the Think Blue, Live Green campaign, if you have any information, or would like to be a part of this movement please follow us on all social media platforms. Instagram @ThinkBlue_LiveGreen_Lib or Facebook at “Think Blue, Live Green Libera” and Twitter @thinkbluelib or by email at [email protected] Look out for more events!

“Think Blue Live Green” is an awareness campaign in Liberia undertaken by MBL Group with support from the Embassy of Sweden in Monrovia to encourage youth participation and support the underserved through engagement and activities for clean and sustainable communities.