ECOWAS experts head to Guinea as disputed poll is delayed 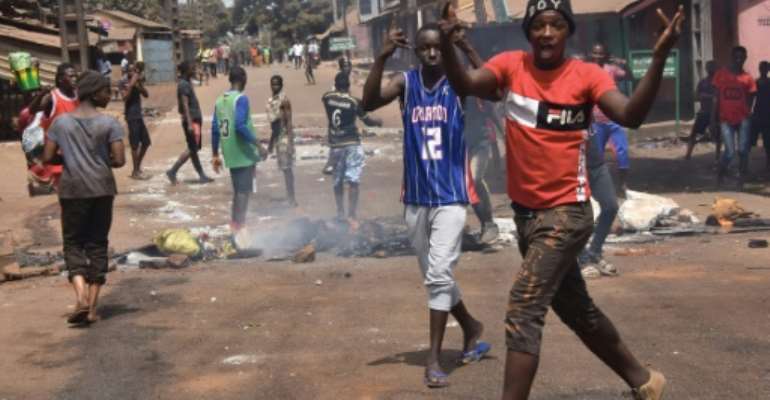 Protesters burn rubbish and block roads along the "axis of democracy" as demonstrations broke out in Conakry in February 2020 after Guinea's President Alpha Conde postponed a parliamentary election. By CELLOU BINANI (AFP/File)

ECOWAS election experts are heading to Guinea, a foreign ministry official said Monday, after the government delayed a controversial constitutional referendum owing to concerns about its credibility.

No date has been set for a new vote so far.

At issue in particular was the electoral roll, which the International Organisation of La Francophonie (OIF) said contained 2.49 million problematic names, including duplicates and those of people who had died.

Around 7.7 million people were registered to vote in the West African state, according to its Independent National Electoral Commission (CENI).

The country has a total population of roughly 13 million.

Guineans have been staging large protests since mid-October over Conde's plan to change the constitution, charging that is a ploy to keep him in power.

But critics argue that a new constitution would reset the term counter to zero, allowing Conde, 81, to run again when his second five-year term ends this year, a possibility the government has not denied.

On Friday, Conde gave a televised address to announce the vote's postponement, after the OIF, EU, African Union and ECOWAS raised concerns.

Conde did not announce a date for a new vote, but in a letter to the 15-nation ECOWAS bloc that was seen by AFP, he said the new poll should take place within two weeks.

It is unclear if that will happen however.

Guinea's Communication Minister Amara Sompare told AFP he could not comment on a precise date because setting one was up the CENI.