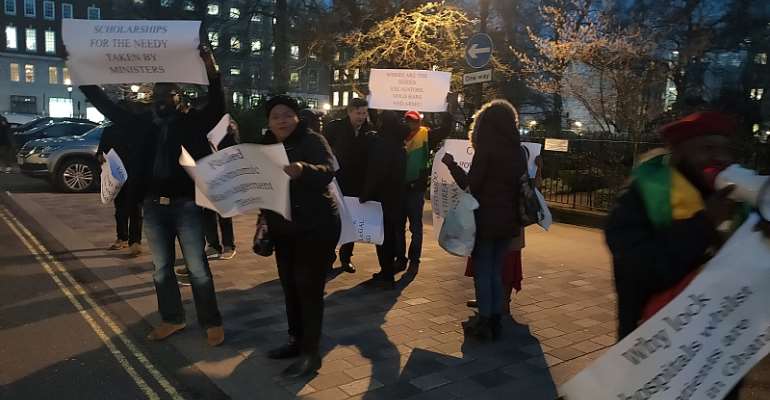 President Akufo-Addo was met with a massive demonstration by Ghanaians in the UK on 27th February when he arrived in London to attend the “Responsible Business 2020 Conference” at Chatham house.

The conference was made up of two sessions. The first session was a discussion on responsible business operations in the face of climate change followed by a second session on data security and privacy.

According to Ghanaian residents in the UK, it is hypocritical for President Akufo-Addo to be an attendee of such a conference when he is actually supervising the degradation and destruction of the environment in Ghana. The Akufo Addo government is infamously known in Ghana for supervising illegal mining which has led to the pollution of water bodies, extinction of aquatic life and the destruction of the livelihoods of local communities.

Most of the communities where illegal mining is taking place are already experiencing prevalence in skin diseases, diarrhoea among others with debilitating effects. It is feared that many years after the illicit mining activity has ceased, residents of these areas will continue to bear the brunt of the delayed and deferred consequences of the chemicals used in mining which would have seeped into the belly of the earth.

Akufo Addo has housed the secretariat of the illegal mining taskforce at the presidency so that he can control the proceeds of galamsey and galamsey kickbacks. He has refused to prosecute his appointees caught on video engaging people in the activity or taking money so they could allow the activity to carry on.

The minister responsible for stopping the illegal mining has been caught on tape saying he needs to allow the illegal activity to continue so they could raise money to fund their party activities to help Akufo Addo win the December 2020 presidential elections. According to the concerned Ghanaians in the UK, the minister is walking around freely without any investigation against him. As if that was not enough, Akufo Addo is embarking on foreign travels with him to spite Ghanaians and show them how much confidence he has in professor Frimpong Boateng.

The concerned Ghanaians in the UK find that very disrespectful and an abuse of the mandate Ghanaians gave to Akufo Addo in the 2016 general elections.

On the face of abundant evidence that betrays Akufo Addo’s sincerity on the fight against the destruction of the environment in his own country, he is not fit to sit among serious and responsible people in such an important international gathering to discuss climate change and responsible business.

It is therefore deceitful on the part of Akufo Addo to pretend to be interested in data security and privacy when his government is responsible for bastardising data security in Ghana.