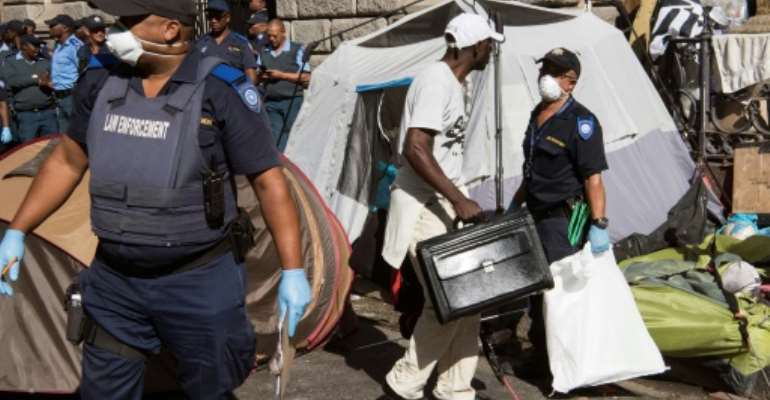 South African police on Sunday forcibly removed hundreds of migrants who had been squatting for four months on a busy Cape Town square popular with tourists.

The eviction ended months of tension between the city and the migrants who had camped on the pavements of Greenmarket Square since last year following a spate of xenophobic attacks.

Cape Town had sought an injunction after around 700 foreign nationals, mainly from the Democratic Republic of Congo and Burundi occupied the sidewalks.

A court last month granted the city the right to enforce its bylaws which prohibit sleeping, washing, defecating or cooking on the streets.

On Sunday, police vehicles surrounded the area and hundreds of officers donning masks and gloves peacefully removed the migrants.

Trucks followed and tore down makeshift structures where they had camped.

Emotions ran high as migrants grabbed their belongs and walked away.

Some sang in defiance and shouted "where's the rainbow nation?", "we are not animals in a zoo" and "we are not cockroaches like you call us. God will punish you for generations."

"People are stranded. We have nowhere to go," said Oliver Majambu, a Congolese refugee.

Many refugees expressed anger and disappointment at the lack of alternative accommodation for them.

"Cape Town is not insensitive to the plight of the refugees, but we can simply not allow the situation to carry on unchecked, as it has had a major impact on surrounding businesses," said JP Smith, the city official in charge of security and safety. 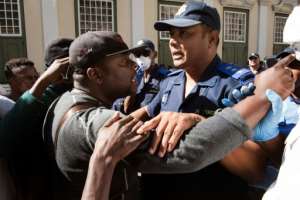 The city had sought the injunction after around 700 foreign nationals, mainly from the Democratic Republic of Congo and Burundi occupied the sidewalks. By RODGER BOSCH (AFP)

"We are not in a position to provide emergency shelter to the group, given the great need that exists among South Africans."

Greenmarket Square is a tourist hotspot with hotels, restaurants and vendors selling African goods to visitors.

Since the refugees moved in, around one-third of the businesses in and around the square in the heart of the city's business district have shut down.

Migrants had initially staged a sit-in protest at a building hosting the United Nations High Commissioner for Refugees (UNHCR) in the city in October, demanding to be relocated to another country.

They were evicted from that building and spent a few weeks at a church before camping at the square.

South Africa, the continent's most industrialised economy, is a magnet for economic migrants. But they are sometimes targetted by locals who blame them for the lack of jobs.

Last year, a surge in mob attacks against foreign workers hit Johannesburg and other areas, forcing migrants to flee shelters or return home.