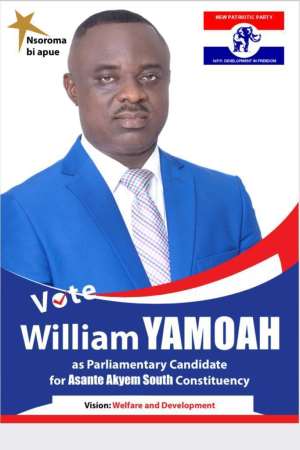 His ability to lead the people of Asante Akyem South Constituency as their Member of Parliament is in serious doubt, as William Yamoah has openly admitted that his decision to contest in the NPP parliamentary primaries was an afterthought.

He disclosed that he is in the race because some 'needy or hungry delegates' he had ever helped in the constituency forced him to contest.

Analysis of an audio recording from an interview he granted a Kumasi based Radio Station, William Yamoah alleged that he never had any plans or desire to contest in the NPP primaries until those delegates repeatedly begged him to do so.

"I came out to contest because some people [delegates] in the Asante Akyem South constituency who used to come to [beg] me for help some years ago, insisted that I come to lead the people so that I can continue to do more for them".

Buttressing his claim, Mr Yamoah - an Aide in the Office of the Vice President said even his Nomination Form was picked on his behalf by the same delegates whilst he was busily working in his office in Accra.

"As a matter of fact, it wasn't part of my plans to contest. But what happened was that most people used to come to me with their problems anytime I visited the constituency and I helped most of them. It was on the basis of that some of the people who are the kingmakers [polling station executives or delegates] of our party came to beg me to come and represent them in Parliament".

He further explained that he was still reluctant until he consulted his family and close allies over the alleged request by the [delegates] before giving his final approval.

His comment which makes him appear unprepared for the MP's job comes at the time the NPP party is set to hold vetting for all aspirants in the various constituencies.

How will he be able to come to terms with the political dynamics, compete with the other political opponents who are master of the game, and how will he also appreciate the numerous development challenges facing the people, since the contest was not part of his cherished dreams?

Why Implement Policies Of An ‘Incompetent’ Leader? – Former ...
1 minute ago