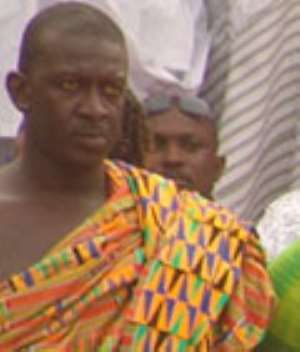 PBL, NIB, ERIB, BENDOZ Helped Him
The Commission for Human Rights and Administrative Justice (CHRAJ) has concluded that Mr John Addo Kufuor, the son of president John Agyekum Kufuor, is the "sole" owner of a property near the President's private residence - known as Hotel Kufuor.

According to the CHRAJ, Chief Kufuor - as he is popularly know - established a company, the Airport West Hospitality Company Limited(AWHCL), as a VEHICLE for the purchase of the hotel.

The company was issued a certificate of incorporation numbered CA-3234 on 23rd September 2002 and a certificate to commence business, number CA-3224, dated 2nd October 2002.

The commission found that the sole shareholder, as of the time of investigations, was Chief Kufuor, who was also the sole signatory and doubled as one of the directors of the company, with his sister, Nana Ama Kufuor, as the other.

According to CHRAJ, 'Chief Kufuor' applied to Prudential Bank Ltd(PBL) to mobilise about $6 million to acquire, complete and operate the hotel.

PBL accepted the invitation and then invited the National Investment Bank (NIB), Home Finance Company limited (HFC) bank, First Atlantic Merchant bank and the ECOWAS Regional Investment bank (ERIB) to participate in financing the acquisition and completion of the hotel.

At the time of the investigations, the report emphasized that the NIB had not paid its $200,000 yet, with the amount of shares not also known, as a shareholders agreement was said to be under preparation.

Further support came from the ERIB, an international financial institution focusing on private sector projects and commercial infrastructure, with the approval of a loan facility of $1 million on August 17, 2005 for AWHCL.

The report further stated that AWHCL took possession of the hotel plus some items and materials, which had been imported for the hotel, which is mortgaged to both NIB and PBL.

On 17th August 2005, the board of directors of ERIB was reported to have approved an amount of $1,000,000 in favour of AWHCL, which was to be secured through the execution of a first class mortgage, pari pasu with co-financiers over the hotel building.

The directors were also jointly and severally guaranteed the repayment of the facility with interest thereon and the guarantee from a guarantee fund or a first class bank.

Also, the hotel building was to be insured against fire with ERIB's interest endorsed.