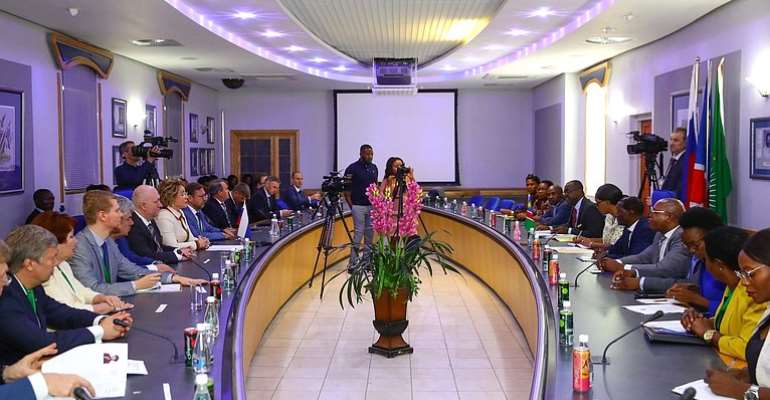 On February 18 - 20, Chairperson of the Federation Council (the Upper House or the Senate), Valentina Matviyenko, headed a Russian delegation on a three-day working visit aimed at strengthening parliamentary diplomacy with Namibia and Zambia. This visit showed Russia's overwhelming commitment to pursuing its strategic interests and supporting its African allies.

According to an official release from the Federation Council, the visit was within the broad framework mechanism of parliamentary consultations between Russia and African countries. The key focus area was on political dialogue, economic partnership and humanitarian spheres with Namibia and Zambia.

Political dialogue: Russian delegation held talks with Zambia's President Edgar Lungu at State House in Lusaka, Zambia. The delegation referred to their visit "as a reciprocal visit" and emphasized a commitment to strengthen political dialogue, and reaffirmed interests in broadening economic cooperation during their discussions separately with Zambian President Edgar Lungu and Namibian President Hage Gottfried Geingob. The Russian delegation also interacted with Speakers of the National Assembly in both countries.

Valentina Matviyenko recalled that during the first Russia-Africa summit held in Sochi, a number of mutually beneficial contracts were signed. She further noted the previous meeting between Namibian President Hage Geingob and his Russian counterpart Vladimir Putin in Sochi, where the two exchanged views, particularly on energy, gave new impetus for further broadening cooperation.

According to its results, a political declaration was adopted, which enshrined an agreement on the regular holding of the summit every three years. This signals the fact that relations have entered a new stage. "In this way, a permanent, ongoing dialogue format has been created, which parliamentarians should also join in," reteirated Matviyenko.

Economic cooperation: The Heads of State and Speakers of parliaments in Namibia and Zambia together with the Russian delegation exchanged views on ways to invigorate bilateral economic cooperation and other areas. The parties reaffirmed their mutual intent to continue close interaction on regular basis. In Zambia, they stressed the potential to boost trade and cooperation in health, heavy-duty industry, agriculture and defence, and security sectors. There was an in-depth discussion construction of nuclear plant.

The Zambian Government hopes that upon commissioning of this project, excess power generated from this plant could be made available for export to neighbouring countries under the Southern African Development Community Power Pool framework arrangement.

Under the agreement that was concluded in December 2016 on the construction of the nuclear plant estimated at US$10 billion. The processes of design, feasibility study and approvals regarding the project concluded. Russia was unprepared to make financial commitment, and Zambia lacks adequate funds to finance the project.

In Namibia, they also held series of talks with government officials. "Inter-parliamentary relations are an integral part of the Russian-Namibian political dialogue. We expect that the visit of the delegation of Russian parliamentarians will give an additional impetus to providing more effective support from the legislators for joint economic projects that can be developed both at the interstate level and between the business structures of the two countries," said Valentina Matvienko.

Conclusion: While the significance cannot be under-estimated, it is also not worrisome that the trip, full of diplomatic symbolism, overwhelming enthusiasm, and renewed promises, concluded without any new major policy announcement. On the other hand, it signals another bid by Moscow to boost relations with these southern African countries.

Namibians were full of respect and praise for the delegation. State House of Zambia issued an official statement that said the high-level visits between Zambia and the Russian Federation "is a demonstration of the warm relations that exist between the two countries." Without doubt, both Namibia and Zambia still have full-fledged hope to scaling up traditionally diplomatic ties with the Russian Federation.