Darfur: tracing the origins of the region's strife and suffering

By Tsega Etefa - The Conversation 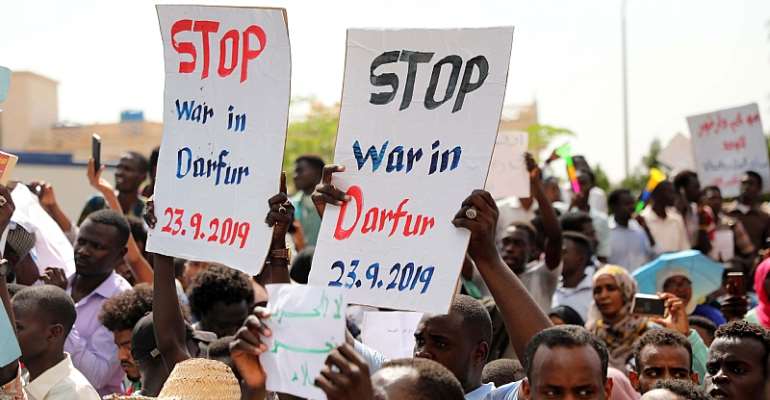 Sudanese protesting against the conflict in Darfur. - Source: Marwan Ali/EPA-EFE

The government of Sudan recently decided to hand over the former president, Omar al-Bashir, to the International Criminal Court to face charges. The reasons lie partly in the history of the Darfur conflict.

Al-Bashir, who was deposed by popular uprising in April 2019, has been accused of war crimes and genocide in the conflict that led to the death of over 300,000 people and displacement of over 2 million .

Darfur is located in the western part of Sudan. It has attracted world attention since non-Arab rebel groups attacked government installations in February 2003. The reasons the rebels, who were mainly from the Fur, Zaghawa, and Masalit communities, took up arms were said to be marginalisation, chronic neglect by government and the absence of any democratic ways of addressing their concerns.

During the colonial era – the region was run by Britain and Egypt between 1899 and 1956 – the British neglected Darfur because the region had neither economic nor strategic value. Instead, London focused on the Nile Valley region, which thus received better education, economic and social services.

After independence in 1956, Sudanese political and economic power was concentrated in the hands of the riverine Arabs who'd had access to education during the colonial era. Darfur lagged behind in economic progress, education and health services.

The situation got worse after 1983, when a devastating drought led to famine in 1985 and 1986. The severe drought also pushed many Chadian Arabs into Darfur's Jabal Marra area, the historical homeland of the Fur people and the greenest place across the Sahel region. The migrants were supported by al-Bashir, who had taken power in a coup in 1989 . And Libya's Muammar Gaddafi recruited Arabs in Darfur to fight Chad's government, which was dominated by non-Arabs.

The al-Bashir administration openly sided with the Arabs of Darfur. Government support to the Arab militias strengthened in the early 1990s after the Sudan People's Liberation Army's incursion into Darfur. The government suspected the Fur, Zaghawa and Masalit of supporting the South Sudan rebels.

Conflict in the area escalated, fuelled by the mismanagement of resources, corruption and excessive intervention by al-Bashir's administration in domestic policies. These worsened poverty, inequality and unemployment in the region.

By 2003 there was a full-blown war in Darfur between the rebels and the army. Contributing factors included the failure to heed villagers' warnings of imminent militia attacks, a slow response by the local and central government and a lack of basic infrastructure. On top of this, government was reallocating land to the Arabs, including recent arrivals from Chad, without proper local involvement.

The al-Bashir administration unleashed the notorious Janjaweed militia, consisting of North Darfur Arabs, on the region. In the 1990s they had been known for looting and destroying Fur villages, together with the army. People close to the Chad border fled and many others were displaced elsewhere in Darfur, where they still live today .

From peace to war

Both Arabs and non-Arabs had lived in Darfur for centuries and had considerable peaceful interaction. They had all been marginalised at one point or another by Khartoum even before the colonial period. Since 1956 independence all Darfurians had grievances against the government. But the al-Bashir administration's divide and rule policy and relying on Janjaweed forces for its counter insurgency strategy brought unparalleled disaster to Darfur.

The strategy made the destruction “deniable”, attributing it to “ancient tribal animosities”.

The effects of the war were devastating. According to the 2004 UN report numerous Fur, Zaghawa and Masalit villages were destroyed. UN staff who visited Darfur in 2004 reported that many Fur villages had been destroyed while those in which Arabs lived remained intact.

Andrew Natsios, the head of the US Agency for International Development in Sudan, stated in 2004 that the Arab militia had:

looted perhaps as many as 3 million, maybe over 4 million, sheep, goats, camels, from the African farmers who have small herds.

That number has grown since then, representing a loss worth hundreds of millions of dollars to non-Arab Darfurians.

Evidence shows that there was a strong working relationship between the local police and the Janjaweed. There's also evidence gathered by the UN that many of the local law enforcement agencies were from Arab communities because the non-Arab officers had

left the location due to intimidation from their Arab colleagues and the Jenjaweed fighters in town.

Civilian officials still in charge of towns also cooperated with the army, police and militia.

The fighting created an atmosphere of hatred between civilian neighbours and damaged the area's long-established culture of tolerance.

The intervention of forces of the African Union and United Nations played an important role mainly in protecting displaced people. Fighting subsided after 2006 but in 2014 the Rapid Support Force (Janjaweed) renewed its attacks on non–Arab villages.

After the fall of the al-Bashir administration in April 2019, a ceasefire was agreed. Negotiations began between the Darfur rebels and government headed by General Abdel Fattah al-Burhan.

But according to the joint African Union-United Nations peacekeeping mission at least 24 people were killed in December 2019 when Arab militia attacked the Krinding Camp, forcing people to flee to the mountains or to nearby towns. There were also reports of similar attacks in other camps of Darfur by Arab militias.

The announcement that al-Bashir will be handed over to the International Criminal Court is a significant step in the right direction. But the peace negotiation process has a long way to go.

Tsega Etefa does not work for, consult, own shares in or receive funding from any company or organisation that would benefit from this article, and has disclosed no relevant affiliations beyond their academic appointment.

Article
Powered By Modern Ghana
South Africans aren't being protected from fake sanitisers: what needs to be done
How COVID-19 changed community engagement in South Africa's low income areas
What South Africans must do to avoid a resurgence of COVID-19 infections
Why #ENDSARS protests are different, and what lessons they hold for Nigeria
King Kwasi Kyei-Darkwah Writes about IMANI
‘I Started 'Progressively Free SHS', I'll Make Current System Better’ – Mahama
Glory In A Mess Sanitation: Who To Call?
African countries need reliable and accessible economic data: recent ratings show why
Malaria parasites in Nigeria are genetically diverse: a danger but also a useful tool
COVID-19 Updates Live Dashboard
TOP STORIES