The Righteous Among The Wicked 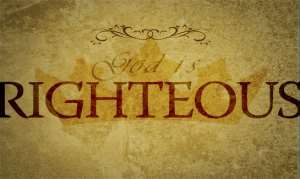 If God were considering whether to destroy your extended family, community, village, town, city or country because of their wickedness, but needed ten righteous people in order to avoid the destruction, would you be one of the ten?

The Lord and two angels, all three disguised as humans, set out to investigate some bad reports about Sodom and Gomorrah (See Genesis Chapters 18 and 19). On their way, they passed by the place where Abraham and his wife Sarah lived. When Abraham saw them, he invited them to his home and gave them water and food. On their way out, the Lord decided to reveal His mission to Abraham. The Lord told Abraham “The outcry against Sodom and Gomorrah is so great and their sin so grievous that I will go down and see if what they have done is as bad as the outcry that has reached me. If not, I will know” (Genesis 18:20-21 NIV).

Abraham, perhaps knowing that his nephew Lot and family lived there, or in spite of it, interceded for the people by pleading with the Lord. Abraham’s plea was in a form of a bargain. Abraham pleaded with the Lord to spare the two cities and their inhabitants from destruction if He found 50 righteous people there. Abrahams must have thought that the population of the two cities was so large that there must have been at least 50 righteous people there. However, to be safe, he bargained and reduced the number to 45, 40, 30, 20, then finally to 10, and each time the Lord agreed not to destroy them if He found that many people there. Abraham did not go below 10, thinking that at least that many people could be found among that population, including his nephew Lot and family. He was wrong.

The two angels proceeded to Sodom and Gomorrah. When they arrived at Sodom, Lot was at the gateway to the city. Lot invited them to his house and provided them with food and a place to sleep for the night. Then trouble started outside Lot’s house. The men of the city heard that two men had come to lodge at Lot’s house. The men demanded of Lot saying, “Where are the men who came to you tonight? Bring them out to us so that we can have sex with them.” (Genesis 19:5). Lot pleaded with them not to do such a wicked thing and even offered his two daughters to them, but to no avail. The two angels pulled Lot inside and revealed their mission, and asked him to gather his family to flee the destruction that was about to occur. The two cities were destroyed along with the people; only Lot, his wife, and two daughters managed to escape.

In the end, the angels had witnessed things by themselves. They could not find ten righteous people to satisfy the bargain Abraham made with the Lord. The righteous can and do make a positive difference. Just as one wicked person may be the cause of calamity that befalls a family, community, village, town, city or country, so can the presence of one righteous person save the day. Would you be counted among ten righteous people if your own family’s survival or progress depended on it? How about your community, village, town, city or country?

Jesus advises us to seek first the Kingdom of God and its righteousness and all other things shall be added unto us (Matthew 6:33). Righteousness begins with our relationship with God. The Bible tells us that Abraham believed God and it was counted to him as righteousness (Genesis 15:6; Romans 4:3). We cannot practice righteousness in isolation as though the sacrifice of death on the cross by Jesus Christ was in vain. If we do so, it would be like what the Prophet Isaiah said that all our righteousness are like filthy rags (Isaiah 64:6). Righteousness, then, must be rooted in faith or believe in God through our Lord and Savior Jesus Christ. (See Romans 3:22).

At least two acts of righteousness were demonstrated in the story. Abraham interceded for others. Christians need to do the same. We should intercede for our families, friends, neighbors, enemies, communities, villages, towns, cities, and countries. We cannot always look the other way and say that it is none of our business when acts of wickedness are being committed by others, because sometimes we could be punished together with those committing the wicked acts.

Secondly, Abraham and Lot practiced hospitality by inviting the strangers home and feeding them. Because of fear, we hesitate to welcome strangers, and some of us are even hostile to them. In Hebrews 13:2 NIV, we are told: “Do not forget to entertain strangers, for by so doing some people have entertained angels without knowing it.” Compare Abraham’s and Lot’s willingness to invite the visitors to eat, to how some of us hide our food from even our friends when they show up uninvited, not to talk of strangers, by delaying eating or resuming eating only after they have left.