Call The Arrogant Bluff Of These People, Please! 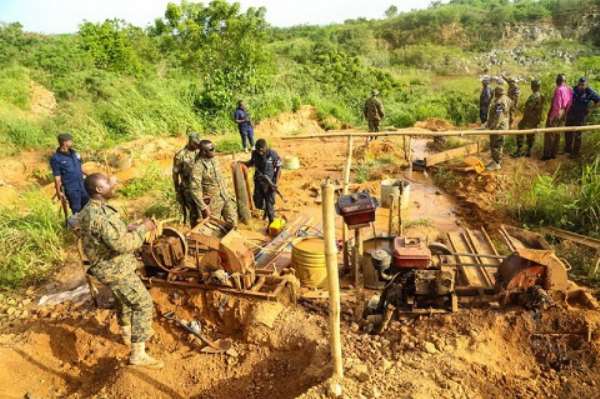 IT has been said authoritatively that “the first duty of a Government is to govern”.

and water-bodies – believe that the Government does not wish to govern.

Why do I say that? Read this:
QUOTE:
Galamsey: Release our colleagues or we will match you boot for boot – Drivers to government

“Members of the National Concerned Drivers Association have reiterated their call [to] the President, Nana Addo Dankwa Akufo-Addo, to order the release of their fellow drivers who were just hired to drive trucks at Galamsey sites, while, according to them, the big names behind galamsey have gone unpunished...

“The drivers, in a statement, threatened that if their colleagues are not released before 6 March 2020, then they had “no option than to match the President boot for boot in Kumasi, no matter the number of Delta Force. [Nothing] will deter us. We say all die be die”, [the statement said. UNQUOTE

The use, by the drivers' statement, of the term “boot-for-boot” gives their game away: it's a coded message pinched from the NDC! Furthermore, the insolent and combative tone contained in their ultimatum aligns them with the sentiments expressed some time ago by someone who recorded a message on Youtube threatening the President with all manner of reprisals if he did not allow “gala” to go on.

I would like to convey to the drivers, the views some of their fellow citizens hold about the drivers' threats. They should take these views of their fellow citizens seriously, for if we lived under laws made to reflect our own culture, instead of being belaboured by laws written in the language of the Great Britain of 1066 and the years thereafter, it is such views that would incite Governmental action against them. They would be put on trial by their own fellow citizens, [asafo] according to the collective wisdom bequeathed to them for dealing with malefactors and nation-wreckers:

QUOTE: “If you people think you are men enough, just try something stupid and witness your smoothness level.” [ADANSI]

“This stupid union [of] drivers should bow their heads in shame! You're all galamseyers going to defend wrong-doers. Big fools” [WORLD]

“If someone hires you to go and kill another person and you agree to [do so] and are caught in the process, you are as guilty as the one that hired you!” Idiots! [ME] “Are you guys serious? If a driver is hired each day for armed robbery operations and he is arrested on one of such operations, when he knowingly knows the work of his employers is illegal, is he guilty or not guilty? Think about this carefully and reason like good citizens of Ghana. Please don't allow anyone to manipulate your association for his or her political gain. Let's love our country!” [ATOAPOMA] UNQUOTE

Even as the drivers were uttering their threats, another heart-rending report appeared on the website of JoyFM describing the wanton destruction visited upon a forest reserve by galamseyers. Entitled Galamseyers destroy 80 hectares of Furi Forest Reserve , the report reads:

QUOTE:c “An unannounced visit by Lands and Natural Resources Minister, Mr Kweku Asumah Kyeremeh, has revealed that illegal miners have destroyed about 80 hectares out of Furi Forest Reserves’ 15, 823 hectares.

This was after the illegal miners successfully outwitted the lean team of the Forestry Commission at Amiase Nsuta, in the Western Region. …“Speaking to Joy News’ Latif Iddrisu, a Senior Forestry Commission Official indicated that battling with armed illegal miners makes their job dangerous, since they lack efficient logistics to fight them. ...He expressed sadness about the turn of events after three years into anti-galamsey fight. "I declared [the forest] a 'Globally Significant Biodiversity Area' (GSB) – a shift from production area to protected area. But now the whole thing is gone, it's so sad it turned out this way".The Furi Forest reserve is in the Prestea enclave, [which] for some time [now] has been known for illegal mining activities.” UNQUOTE

I started this piece by reminding the Government that its first duty is to govern. Governing does not mean making statements of intent, but showing a firm hand when the laws the Government has made (or the good ones it has inherited) are flouted.

The Government has enacted a new law which makes those who assist galamsey operators liable to long terms of imprisonment. If it had put anyone before the courts to answer charges under that law, would the so-called Concerned Drivers have had the temerity to threaten the Government with “boot-for-boot” action?

By failing to put the new legislation to work to serve as a deterrent to galamseyers and their accomplices, the Government has INVITED the drivers' union to behave insolently towards it. But let the Government try a smack of firm government and the drivers would be denouncing their own officials and begging for mercy.

The Government had also announced previously that it was to tag all excavators I the country so that their whereabouts could be monitored at all times. If the police had been furnished with such tags, would they not have been able to arrest excavators that were being transported into rivers and other galamsey areas, without any involvement by the Operation Vanguard and Galamstop teams whose seizure of excavators has caused so much confusion (as charges of corruption (in the release or sale of excavators) make their rounds from radio station to radio station on a regular basis?

I have often urged the Government to view the galamsey disaster in the same light as it would view political, insurgency in the country. I hope it will listen. For the destruction of our water-bodies, alongside out lands and forest reserves, has done more damage to us already than a political insurgency would.

For what insurgency would cost us $20 billion or more – the figure estimated to be the cost of reclaiming the land and rivers that have already fallen victim to galamsey?