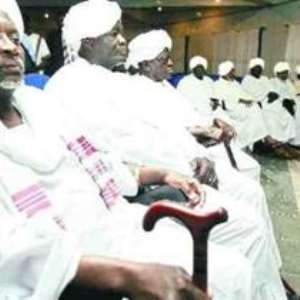 The Sudanese government and the main Darfur rebel group signed a peace plan Friday after a diplomatic push by the U.S., a major step in the international effort to end the death and destruction in western Sudan.

Two rebel groups, however, rejected the accord backed by the African Union, the United States, Britain, the European Union and the Arab League and skipped the signing ceremony at a Nigerian presidential villa.

Optimism over the deal was muted by their absence and a history of failure to live up to agreements struck over two years of negotiations in the Nigerian capital. A cease-fire signed in 2004 is in tatters.

Observers broke into applause and whoops of joy as the parties signed the last page and then proceeded to initial each of the 85 pages of a document written by the African Union and revised by U.S., British and other envoys to meet rebel concerns. The hall was filled with traditional leaders in white turbans, fighters in camouflage turbans, diplomats and journalists.

Nigerian President Olusegun Obasanjo, a key figure in peacemaking efforts across Africa and host of the protracted Darfur talks, warned of the challenges ahead.

"Unless the right spirit, unless the right attitude and right disposition is there, this document isn't worth the paper it is signed on," Obasanjo said. "Those who don't sign, we will continue to appeal to them. The window of opportunity must not be allowed to close."

U.S. Deputy Secretary of State Robert Zoellick, who was dispatched Monday to push for an agreement, indicated the two smaller rebel groups that rejected the treaty could be bypassed. His assessment was bolstered when one of the two split Friday, with dissenters criticizing their leader for not embracing the proposed treaty.

Zoellick said implementing the agreement would not be easy, but he was looking ahead next to organizing a U.N. peacekeeping force for Darfur.

The Sudanese government initially rejected calls for U.N. peacekeepers to replace the thousands of African Union peacekeepers in Darfur now, but indicated Friday it would yield once the peace treaty was signed.

Government spokesman Abdulrahman Zuma was optimistic earlier Friday after the announcement that the rebel group would sign.

"The deal is peace," he said. "I think that the victory today is for Sudan."

Members of the fractious rebel camp are united in accusing the central government of neglecting their impoverished region, but divided because of leadership rivalries and differing approaches.

The largest rebel group, Minni Minnawi's faction of the Sudan Liberation Movement, signed. The SLM faction led by his rival, Abdel Wahid Nur, and the smaller Justice and Equality Movement rejected the accord because of concerns security and compensation for war victims had not been guaranteed and because it called for a top presidential adviser from Darfur instead of a vice president.

Obasanjo praised Minnawi as "not only a good soldier, but a good statesman."

The peace deal calls for a cease-fire; disarmament of so-called Janjaweed militias linked to the government and accused of some of the war's worst atrocities; the integration of thousands of rebel fighters into Sudan's armed forces; and a protection force for civilians in the immediate aftermath of the war.

Political provisions include guarantees rebel factions will have the majority in Darfur's three state legislatures, but the rebels did not get the national vice presidency they had sought.

Nur met with Obasanjo for hours, delaying the signing ceremony, then briefly went into the hall where the accord was to be signed.

He left, telling reporters the proposed accord was "a big disaster" because he believed it did not go far enough to guarantee disarmament of the Janjaweed. Nigerian security tried to stop Nur from speaking to reporters, then barred reporters who had followed him out from returning to witness the signing.

Further complicating the issue, one of Nur's top negotiators, Abdulrahman Moussa, said he was forming his own Front for Liberation and Renaissance and taking half of Nur's camp with him to support the peace agreement.

Sudan's government agreed days ago to an initial proposal drafted by African Union mediators and has been flexible as U.S. and British officials fine-tuned it to address rebel concerns.

Deadlines have been extended twice since Sunday and Thursday's session went five hours beyond the midnight time limit.

On Thursday, U.N. Secretary-General Kofi Annan urged all countries to press the warring parties for agreement but warned the international community has an obligation to protect civilians in Darfur, by force if need be.

The U.N. Security Council a year ago authorized seizure of assets and a travel ban on individuals defying peace efforts or violating human rights law in Darfur. Those sanctions were imposed for the first time last month against a commander of the Sudanese air force, a Janjaweed militia leader and two rebel commanders.

At least 180,000 people have been killed and more than 2 million forced to flee their homes in what the United Nations has called one of the world's worst humanitarian crisis. The Darfur conflict, which erupted in February 2003, also has spilled into Chad and Central African Republic. The violence threatens to escalate: Osama bin Laden last week urged his followers to go to Sudan to fight a proposed U.N. presence.