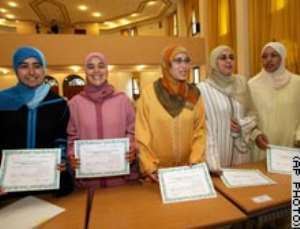 Fifty women have graduated as Muslim preachers, part of a concerted effort by authorities in Morocco to promote moderate Islam in a country grappling with extremism.

Another 150 men graduated Wednesday as imams, or prayer leaders. The 50 female religious guides, or morchidat, won't lead prayers in mosques, which is reserved for men, but will be sent around the country to teach women -- and, occasionally, men -- about Islam.

While Moroccan officials said the appointment of female state preachers was a rare experiment in the Muslim world, others said it was unprecedented in Morocco and the majority of other Arab countries.

"Your duty ... is to prevent intrusion by foreign agents trying to violate our values and traditions," Ahmed Taoufiq, minister of Islamic Affairs, told the graduates Wednesday.

"You must be committed to the faith and politics of the state which the people have chosen. This choice includes the policies of the Amir al Moumenin (Commander of the Faithful) who runs deep in our veins," said Taoufiq, referring to the religious title of King Mohammed VI.

The training of the preachers is part of a campaign launched by the young king, a descendant of the Muslim Prophet Muhammad, to strengthen state-controlled mosques while undermining radical clerics who preach Islamic extremism. He has vowed that no foreign religious doctrine would be tolerated in the North African kingdom, which is a close ally of the United States and a partner in its war against terrorism.

Moroccan officials say the May 16, 2003, suicide bombings in the commercial capital of Casablanca were inspired by radical Muslim clerics who preached violence to poor and disillusioned youths in slums of the big cities.

More than 2,000 people were arrested as a result of the bombings, including Mohammed Fazzazi, who is serving a 30-year-sentence for preaching violence. Two other well-known hard-line Islamic clerics, Abu Hafs and Hassan Kettani, were arrested before the bombings. They were convicted and sentenced to 30 and 20 years in prison respectively for being the ideologists of the Salafia Jihadia militants.

In an interview with a Moroccan weekly six months before the Casablanca blasts, Abu Hafs bragged that his mosque had been packed every Friday since the Sept. 11, 2001, attacks on the United States and that his taped sermons were widely sold. He said the Sept. 11 hijackers were heroes.

Since the Casablanca blasts, Moroccan authorities have been monitoring the country's mosques closely to ensure that they do not recruit insurgents. At least four were shut down following the Sept. 11 attacks. Authorities also try to control -- although with little success -- the sale of inflammatory books and videotapes.

Friday prayer sermons now must be approved by authorities. Underground mosques are believed to continue to exist, although to a much lesser degree than before the blasts.

The king's initiatives include the creation a year ago of the Mohammed VI Quran radio station that broadcasts religious programs, and the Assadisa Islamic satellite TV station.

The Council of Religious Scholars, established by the king two years ago, has been issuing religious edicts on the most pressing questions of the 21st century -- and, surprisingly, they've been well-received by both young people and hardened Islamists.

Taoufiq said 2,000 of Morocco's more than 24,000 mosques will be equipped with TV sets in the comings weeks. Already, the ministry's Web site enables the faithful to chat with religious scholars at 1,000 key mosques in the country.

The pioneer group of morchidat, who finished a yearlong course in Islamic law, philosophy and the history of religions in early April, was trained to give basic religious instructions in mosques and provide support in prisons, hospitals and schools. Their salary is about $500 a month.

Applicants for the course must have a bachelor's degree and be under 45. Male applicants must know the Quran by heart, while female applicants should know at least half of it.

Although it is a first for Morocco -- which like many other Muslim countries has shunned the rise of women to senior religious positions -- Egypt and Iran have seen an increase in female scholars of Islam.

Even though there are no restrictions in Islam for women to become religious scholars, the male-dominated Muslim societies have generally disputed that women should have a senior position. Any woman wishing to be an imam can lead prayers only for a group of women, not for men.

Fatima Titi, 24, said she was very excited to become a religious guide.

"I am looking forward to portraying a good image of Islam, one that's forgiving and promotes peace," she said.

We can't wait any longer – CLOGSAG to embark on nationwide s...
28 minutes ago

Nat Nuno Amarteifio, former Mayor of Accra to be buried on F...
28 minutes ago