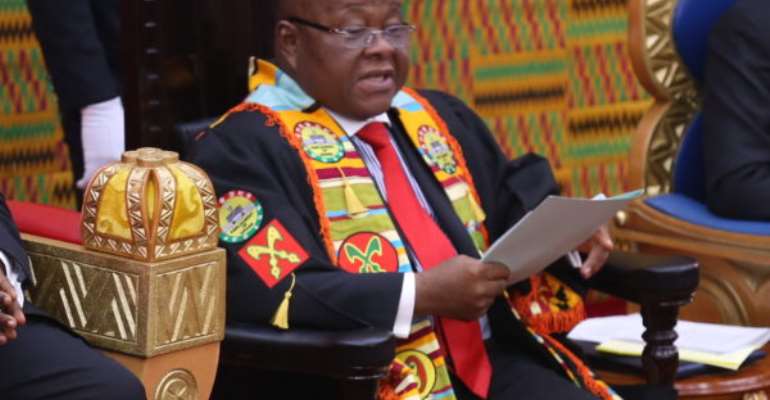 The Ghana Journalists Association (GJA) has condemned threats by Speaker of Parliament Prof. Mike Ocquaye to revoke the accreditation of journalists.

The Association describes the comments as tantamount to interfering with media independence.

The Speaker made the threats Wednesday after journalists abandoned the SONA debate to interview a minority MP.

The Speaker who was furious about the incident accused journalists in parliament of abandoning the chamber during the debate to engage minority MPs who had abstained from the debate. He has come under heavy criticism for the threat.

The GJA has also threatened legal action should the threats resurface in future.

A statement signed by its president Affail Monney said “we recognize and respect Parliament’s powers to regulate coverage of proceedings of the House for purposes of security, order and space. The GJA however, wishes to state that journalists cannot be denied accreditation for arbitrary or content-based criteria.”

“The Speaker of Parliament is on record to have said -You are here as guests by my permission because of the importance this House attaches to your profession. Any such deviation would make you an unwelcome guests and your welcome would be duly withdrawn”.

“Parliament is the House of the people. And so, in the public interest. journalists’ access to the House cannot be deemed as a privilege but a necessity to enable them report to the people what their elected representatives are up to – be it during official proceedings or any other activity in the House that are matters of great public interest.

“We also note that while the journalists may not have right of presence in Parliament, the presence in the House greatly enhances the righteousness of the House in respect of promoting accountability, transparency, good governance and free speech and expression by members themselves. It is not for nothing that our forebears dedicated a whole chapter (Chapter 12) in Use 1992 Constitution to media freedom”.

The GJA indicated “Article 162(4) of the 1992 Constitution was designed to insulate the media from control or interference in the performance of their duty. Article 162(5) further mandates the media to uphold the responsibility and accountability of the Government (including the Legislature) to the people of Ghana without fear or favour.”

“We reiterate that the Speaker’s comments are tantamount to interfering with the editorial independence of the media. We further state that the decision as to what activity in Parliament to highlight. cover or give attention to is entirely within the purview of the various media houses.”

The GJA further advised that “instead of flaunting its powers at the media, is it not better for the leadership of the House to demonstrate the powers and respect it commands by directing Members of Parliament (MPs) who are elected and paid by the people to perform duties for, and on behalf of, the people.”

The statement ended “the GJA will not hesitate to undertake every action, including legal recourse to vindicate and reaffirm the freedoms and independence of the media should this unhealthy threat or admonition resurface in future.”