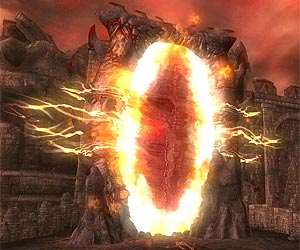 The rating for the magnificent Elder Scrolls IV Oblivion has been changed from 'Teen' to 'Mature' by the Electronic Software Ratings Board, after the classification board was notified of a user-created mod that made female characters topless, as well as excessive blood and gore scenes that had previously been overlooked by the ratings committee.

The developers of the game, Bethesda, have hit back at the ESRB and whilst they are not going to contest the new Mature rating they did wish to put forward their view:

"The ESRB reports that [the ratings change] is due to content in the game that was not fully disclosed when rating the game initially. Bethesda... developed the game, handled the ratings application before the ESRB, and stands behind it. Bethesda Softworks made what it believes was a full, accurate, and comprehensive submission on Oblivion to the ESRB months before the game's release. Bethesda used the ESRB's application forms and believes it adhered closely to their requirements. Nothing was hidden from the ratings agency. No effort was made by Bethesda to lobby or influence the agency for any particular rating."

The 3rd party mod, designed by what Bethesda describes as "hackers" is in a similar vein to the Hot Coffee mod that caused so much controversy last year when it was released for Grand Theft Auto. Both GTA and Elder Scrolls are published by 2K Games. At this moment in time the nudity mod for Elder Scrolls is only available as a download for PC users and there is no indication that Microsoft will be making the patch available through its Xbox Live service!

“Some modders have used a third party tool to hack into and modify an art archive file to make it possible to create a mesh for a partially nude (topless) female that they add into the game. Bethesda didn't create a game with nudity and does not intend that nudity appear in Oblivion. There is no nude female character in a section of the game that can be 'unlocked'. Bethesda can not control tampering with Oblivion by third parties. Bethesda is taking steps to ensure that modders can not continue to hack into Oblivion's art archives to create partially nude figures."

The knock on effect of this could be that developers make their games so that they can't be modified. Despite the improvement in sales a modding community may bring, developers tend to strive to get their games classified with as low a rating as possible to ensure maximum availability to the general public. If the modding community threatens that, then perhaps it will be the one to suffer. The response to the accusations that the game contained excessive blood and gore was angled slightly differently:

"Bethesda advised the ESRB during the ratings process that violence and blood effects were 'frequent' in the game – checking the box on the form that is the maximum warning. We further advised that the game contained occasional torture, vulgar acts, and gore. We gave accurate answers and descriptions about the type and frequency of violence that appears in the game. We submitted a 60-page document listing the explicit language, acts, and scenes in the game. Oblivion packaging already contains warnings for 'Violence' and 'Blood and Gore. We believe that this critically acclaimed game is not typical of Mature rated titles, and does not present the central themes of violence that are common to those products."

Few would argue that Oblivion was in the upper end of graphical violence but it would seem it has done enough to bring up the issue of violence in video games once more into the spotlight. Either way the game is being reclassified for retails sales and the ESRB will be doing its best to inform parents of the change in classification to current owners.