Mint Leaves are very common in Ghana. Interestingly, in Ghana, the local name is Nunum. The word “mint” stems from the Latin word mentha. In Greek, the word “minthe” is rooted in Greek mythology. According to Greek legend, Minthe was a nymph whom Hades fell in love with. When his wife, Persephone, found out, she turned Minthe into a plant to be constantly crushed and stepped on. When Hades was unable to reverse the spell, he instead gave her a delicious mint-like aroma so that he could still smell her.

Mint is thought to have engineered from Asia and the Mediterranean. Ancient Greeks used mint as a cleaning product and added it to their baths to provide a cooling and stimulating sensation. Meanwhile, Romans used the herb for culinary purposes and took advantage of its breath-freshening properties as well. Throughout history, many cultures have viewed mint as a symbol for hospitality and a way to welcome guests.

In the 21st century, the mint leaf is respected for much more than its distinct flavor and aroma. It’s recognized for its medicinal properties, extensive nutrient profile and powerful effects on health.

Mint leaves are often considered little more than an ingredient used to spice up drinks or settle an upset stomach. In reality, though, the potent little mint herb offers an impressive array of important vitamins, minerals and health benefits that make it a true powerhouse of nutrition. That’s why mint earns a spot as one of the top healing herbs and spices .

In fact, the potential mint leaves benefits extend way beyond freshening up your breath. Research shows that mint leaves may even bump up brain function, aid in digestive health and help balance hormone levels to keep your body at its best.

So this paper discusses the mint leaves impact on our health.

Mint Leaves: what are they? 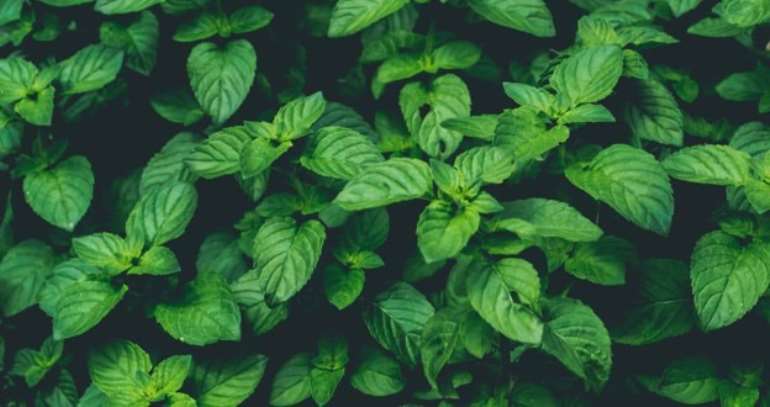 Mint leaves can refer to any plant in the Mentha genus, but the term is most often used to refer to peppermint and spearmint, the two most common types of mint plant. Spearmint is a plant with a sweet flavor that works well in many recipes while peppermint has a higher concentration of menthol, which accounts for many of the medicinal uses of mint leaves.

Mint leaves are extremely multipurpose and can be used to make a soothing cup of tea or added to everything from salads to desserts. Plus, studies show that these different variations of the mint herb could have a number of beneficial effects on health, from enhancing brain function to keeping hormone levels under control, giving you all the more reason to consider adding this powerful herb into your weekly rotation.

Many people reach for mints at the first sign of stomach troubles, and for good reason. Mint is well-known for its stomach-soothing properties thanks to the presence of a compound in peppermint oil called menthol, which helps relax the muscles in the digestive tract to provide relief according to one study conducted by Hills JM and Aaronson PI 1991

Studies show that mint may be especially beneficial for people with irritable bowel syndrome (IBS), a condition that causes IBS symptoms like abdominal pain, constipation, diarrhea, nausea, bloating and cramps. In fact, one double-blind, placebo-controlled study conducted by Cappello et al 2007 out of Italy gave people with IBS peppermint oil capsules for four weeks and found that symptoms were slashed by 75 percent.

Many over-the-counter cold or flu medicine contain “menthol” on the list of ingredients. Menthol is one of the primary compounds in peppermint oil, and although there is conflicting evidence about just how effective menthol may be at relieving congestion, several studies have found that it could help improve airflow to reduce cold symptoms ; one of such study was conducted by Kenia et al 2008 in a 42 healthy children aged 10 and 11 in a school setting and the second study was also conducted by McKay DL and Blumberg JB 2006

Exploding a few mints or a stick of mint-flavored gum is a well-known natural remedy to freshen up bad breath and promote oral hygiene. One of the main benefits of peppermint tea is its powerful antimicrobial properties, which can help kill off bacteria to optimize oral hygiene.

Interestingly enough, some research shows that even the mere smell of mint could be enough to bump up brain power and improve cognitive function. One study conducted by Moss et al 2008 published in the International Journal of Neuroscience, for example, showed that the aroma of peppermint was able to enhance memory and increase alertness. Similarly, another study by Bryan et al 2009 published in the North American Journal of Psychology also showed that peppermint scent was effective at reducing fatigue and anxiety while improving alertness, thanks to its ability to stimulate the central nervous system.

Broken, sore and painful nipples are some of the most common side effects of breastfeeding , many of which can be difficult to effectively soothe and treat. Some research shows that mint leaves could help relieve pain caused by breastfeeding by causing a reduction in these serious symptoms and side effects when applied topically.

A 2007 study conducted by Melli et al at the Alzahra Teaching Hospital in Iran showed that applying peppermint gel was significantly more effective than lanolin at preventing nipple cracks in nursing mothers. Another study by Sayyah et al 2007 published in the International Breastfeeding Journal found that daily use of peppermint water could prevent nipple cracks, noting that women who used it regularly also reported less pain.

Some studies have found that mint tea benefits polycystic ovary syndrome , a condition in women that is characterized by excess levels of male hormones. This is because it has anti-androgen effects, helping to reduce testosterone levels to keep hormone levels in balance .

One 2010 study conducted by Grant P published in Phytotherapy Research showed that drinking spearmint herbal tea was able to significantly decrease testosterone levels and improve subjective assessments of hirsutism, or irregular hair growth, in women. An animal study conducted by Sampaio FJ also showed that drinking peppermint tea led to a reduction in testosterone in rats compared to a control group, suggesting that it could be beneficial for those with PCOS.

Also known as dyspepsia , indigestion is defined as impaired digestion, resulting in recurrent symptoms like heartburn, nausea, belching and abdominal pain. One study conducted by Inamori et al 2007 found that peppermint oil speeds up the emptying of the stomach, which could protect against indigestion to prevent symptoms. Using peppermint oil as a treatment for indigestion has also been shown in a study conducted by Madisch et al 1999 to be effective, especially when coupled with other ingredients like caraway oil.

Although the nutritional content of mint can vary between different species, mint generally contains a good amount of vitamin A and other important nutrients like iron and manganese.

In addition to the nutrients listed above, spearmint also contains a small amount of B vitamins, phosphorus, potassium, zinc and copper.

Mint Leaves in Ayurveda and TCM

In Ayurveda , mint leaves are thought to promote digestion and improve respiratory health. Moreover, mint is considered pacifying for all three doshas, meaning it can be a beneficial dietary addition for just about everyone.

Meanwhile, in Traditional Chinese Medicine , mint leaves are said to have cooling and aromatic properties. Mint is also considered to be especially useful in promoting the health of the liver, lungs and large intestine and is also sometimes used to treat conditions like diarrhea and menstrual pain. 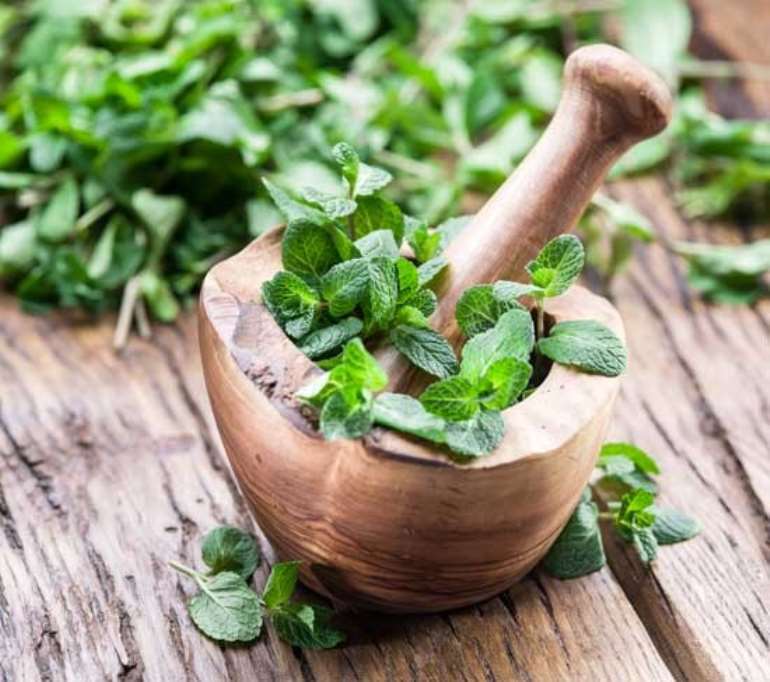 Mint refers to any plant in the Mentha genus, which includes plants like peppermint and spearmint along with up to 16 other species grown all around the globe. Compared to peppermint leaves, spearmint leaves generally have a sweeter flavor. Meanwhile, the menthol in peppermint leaves is much more concentrated, resulting in a characteristic cooling sensation when consumed or applied to the skin. Because of its distinct taste, spearmint is often added to recipes and drinks while peppermint is typically used medicinally.

However, both bring a separate set of benefits to the table and can also be combined to help you take advantage of the many health-promoting properties that mint leaves have to offer.

Just as there are several different varieties of mint available, there are also many different kinds of basil. Sweet basil, the type that is most often used in cooking, has a mild yet peppery taste and a sweet aroma that sets it apart as a spice cabinet staple. Like mint leaves, there are also numerous benefits of basil , ranging from reducing blood sugar levels to protecting against inflammation.

In certain recipes like savory dishes, basil can be swapped in for mint to add an extra burst of flavor. Because spearmint is considerably sweeter than basil, though, mint leaves may not make a suitable substitute for basil in recipes like marinara sauce or pasta dishes.

In conclusion in this chapter,

DISCLAIMER : This post is for enlightenment purposes only and should not be used as a replacement for professional diagnosis and treatments. Remember to always consult your healthcare provider before making any health-related decisions or for counselling, guidance and treatment about a specific medical condition