RE: Investigate And Prosecute Nana B For Involvement In Illegal Mining - NDC Youth 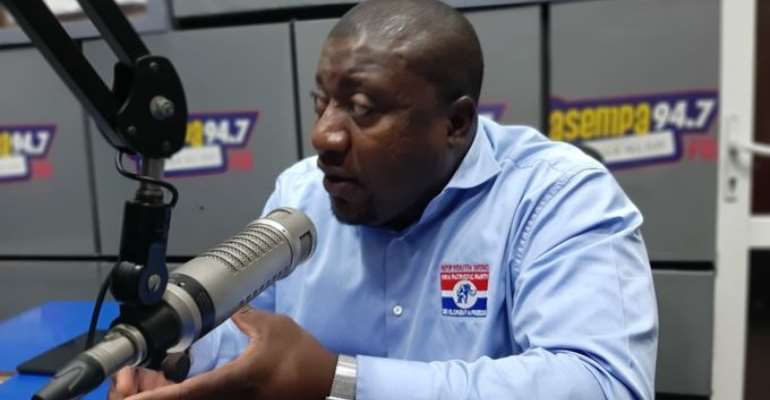 My dear friends, the biblical virtue in Matthew 7:3-5 which asks the question, why do you look at the speck of sawdust in your brother's eyes and pay no attention to the plank in your own eye, is right for all who seek justice, must first come with clean hands. I say this in respect of the above authored statement from the youth leader of the NDC, George Opare Addo, in demand for an investigation and prosecution of Nana B, the Youth Commander of the New Patriotic Party, NPP. This according to them follows an alleged video recording of Hon. KennedyAgyapong's alleged of Nana B's involvement in illegal mining.

Sometimes, when I tell you that our friends in the NDC do not deserve any place to serve humanity in Ghana, some friends think we are being too harsh on them. But it is exactly what they are. Their posturing and reactions to National concerns leave much to be desired. Today, which is still the same century and the Year of our Lord, they want us to believe what Ken is saying and of course, worthy of investigation. How strange?

It's interesting however that they find it comforting to say that Ken makes a lot of unsubstantiated allegations but quick to add that this very one against Nana B was a serious one because of the sensitive nature of it. How ridiculous? If such allegations have now become the basis for investigating individuals in this country, what about those substantive matters of illegalities which plagued his party while in government? Is it possible that he can write same to the necessary state institutions to look into these matters and prosecute same?

The Scandal-infested John Dramani Mahama's term as Vice president and president of the Republic was buffeted by several years of politico-economic Scandals that have cost Ghana a great deal of money and in some cases embarrassed the country. These Scandals are cast in stone and i believe George Opare and his NDC youths are not oblivious about them? These Scandals are not just mere moments of allegations but very substantive matters that wil live long with the NDC in a very long period. They range from Dzifa Attivor's Bus branding Scandal, Mahama's Ford Expedition gift Scandal, GYEEDA scandal, SADA Scandal, NSS scandal, Judicial scandal, Brazil 2014 Scandal, Brochure scandal, Embraer 190 scandal to the most recent one involving GO1/Individual 1 and Intermediary 5.

George, why not be kind and honest enough to remove the Plank from your own eye before paying attention to your brother's speck of sawdust in his eye? Tell John Mahama to explain to us the youths of this country and its dwelling across the world of his involvement in the Airbus Scandal. He should tell us first, the 3-member committee set up by Professor Evans Atta Mills to investigate him of his dealings in the purchase of the Brazilian Aircrafts. George, secondly, we would want to know who GO1/INDIVIDUAL1 is in the UK/USA's court ruling against Airbus bribery Scandal under MillsMahama.

The above, are not matters of allegations but substantive matters of court rulings that should engage you George Opare and the youths of the NDC. Although the President like his counterparts in Malaysia and Sri Lanka, has ordered an investigation into the matter, I entreat that the same spirit of nationalism should edge you to do same by writing to the necessary state institutions to look into the Airbus bribes under JM. It is the only way we can be on equal playgrounds and take you serious in the matter of ending galamsey in this country.

Dear friends, not too long ago, while the NDC was in charge of state affairs, we all can tell the level of commitment to the fight against galamsey in this country. They just didn't care about a thing and threw in the towel before sunset. But this government led by Nana Akufo-Addo has shown a groundbreaking commitment to, not just ending the menace but regularize the activities of illegal mining. The results are there to show and compare, even though the NDC has a higher taste of throwing out propaganda and lies. The issue surrounding the missing excavators is just an isolated incident that is currently being investigated.

As citizens, the fight against galamsey is not a matter for only the President but for us all to lend him our support to bring sanity. Let's support him with our unfailing faith in prayer and the courage to pursue further justice in ending this tragedy. This knee-jerk approach by the NDC is one of pretense and retrogression. We should reject that with all our might.