NLA Threatens To Sue MTN, Vodafone, AirtelTigo And Keed Ghana For Condoning Illegality; Order Them To Shut Down Online Game 5/90 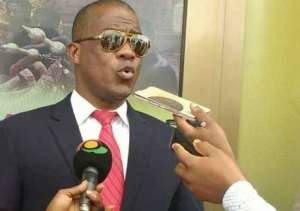 The National Lottery Authority (NLA) has ordered MTN, Vodafone, AirtelTigo and Keed Ghana Limited to immediately shut down the operations of the online game 5/90 which uses the shortcode *959#.

DAILY GUIDE has learnt that management of the NLA has set up a joint working committee, with the leadership of Lotto Marketing Companies, to deal with the illegality.

The NLA has threatened to sue the three companies, MTN, Vodafone and Keed Ghana Limited for, as it puts it, facilitating the illegality should its directive for a shutdown of the operations go unheeded.

A statement from the NLA stated categorically that “we have not issued a licence to Keed Ghana Limited to operate 5/90 Lotto Game online and via shortcode *959#”.

It said, “We appeal to members of the Association of Lotto Marketing Companies to remain calm and be patient as the Board of Directors takes the necessary steps and actions to address the illegal operation of the mobile game.”

The Director-General of NLA, Kofi Osei-Ameyaw, has reportedly made several efforts including writing letters to the National Communications Authority (NCA), Keed Ghana Limited, MTN, Vodafone and AirtelTigo to shut down the shortcode *959#, operating 5/90 lotto which has been operating illegally but to no avail.

The NLA has warned the public to desist from patronizing the online game which, as it emphasized, had not been licensed by the authority.

When authorization is given, the statement said, the information would be communicated to the public “but for now those who patronize it do so to the detriment of our Lotto Marketing Companies who are the backbone and sales force of the NLA.”

DAILY GUIDE has learnt that the illegal online operation is directly and indirectly destroying the sales of the Lotto Marketing Companies, and the overall revenue generation of the NLA.

The granting of licences for gaming is covered by Act 722, the breach of which is punishable by a court of competent jurisdiction.