'You had to pay': Angola's deep-seated corruption legacy 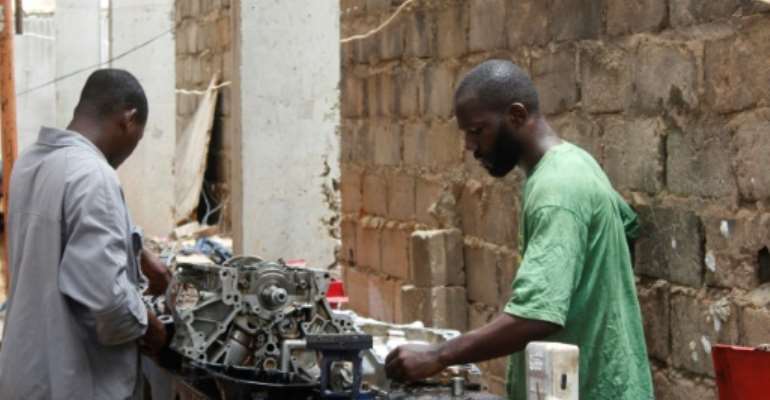 Mechanic Joao Pande, right, says corruption still permeated all levels of Angolan society. "If you know someone... they will do what you want and then you pay". By Sofia Christensen (AFP)

Entrepreneur Antonio Almeida has learned to navigate around the potholes of doing business in Angola.

Since launching his business two decades ago, the 44-year-old has opened seven luxury clothing stores, a customs brokerage firm and a suburban shopping centre in the capital Luanda.

Along the way he faced the 2014 global drop in oil prices, crippling Angola's debt-ridden, oil-dependent economy -- at a time when relatives and cronies of then president Jose Eduardo dos Santos were allegedly looting state coffers.

She was indicted last month for a host of top-level financial crimes allegedly committed during her tenure at Angola's oil giant Sonangol, which she headed during her father's reign.

Almeida and millions of ordinary Angolans are still paying for that graft-ridden era.

"Corruption brought many inequalities and difficulties," Almeida said from the office of his Galeria Vida, which he opened in 2016.

"If you needed a specific type of authorisation for your business you had to pay," he recalled.

That discouraged local investment and created an over-reliance on imports and a serious dearth of foreign exchange.

Almeida has had to scrap plans to open a second shopping centre because of a depreciating kwanza currency and elusive bank loans.

Five of his clothing stores have gone bankrupt since 2014 as most middle-class Angolans can no longer afford imported brands.

The daily struggles of Angolans have piled pressure onto President Joao Lourenco, who has failed to reboot the economy since he took over from dos Santos in 2017. By Sofia Christensen (AFP)

The daily struggles of Angolans have piled pressure onto President Joao Lourenco, who has failed to reboot the economy since he took over from dos Santos in 2017.

Africa's second-biggest oil producer has suffered three consecutive years of negative growth and is not projected to ease out of recession until this year, according to the African Development Bank.

"There is this lack of money and worse, there is debt piling up," he said, adding that the situation was discouraging desperately needed investment.

If he succeeds, it would offer temporary relief and "go down quite well with the local population," Besseling told AFP.

Donors and foreign investors have looked favourably on Lourenco's anti-corruption drive, with the International Monetary Fund approving a $247 million loan to Angola in December.

The ex-ruler's son and a former central bank governor are facing trial for alleged embezzlement, while the last transport minister was jailed for corruption last year.

The market stalls are laden with grilled fish and meat cuts, household goods and clothes, while many offer cell phone repairs. Yet customers are scarce. By Sofia Christensen (AFP)

But as high-profile, headline-grabbing prosecutions unfold, most of Angola's 30 million people wallow in poverty.

"If there had not been corruption I would not be in this market."

The market stalls were laden with grilled fish and meat cuts, household goods and clothes, while many offered cell phone repairs.

Yet customers were scarce.

"Things are not easy these days," said Maria Eunice, 43, clutching a bag of flour and cake decorations for the bakery she runs from home.

"We don't know why," she added. "Nobody can explain why prices are increasing."

Angola's finance minister declined a request for an interview.

Despite promises to diversify the economy, the government continues to rely primarily on oil and diamond exports, with little of the revenue trickling down.

"My boss buys flour from abroad in (US) dollars," said Thierry Konko, who manages a bakery. "Dollars are a huge issue."

Six months ago, the owner switched to lower-quality flour to keep prices competitive, but customers have noticed.

Africa's second-biggest oil producer has suffered three consecutive years of negative growth and is not projected to ease out of recession until this year, according to the African Development Bank. By Sofia Christensen (AFP)

"As we are fighting... it is more important for the foreign community to believe in (Angola) and invest," Quixina told AFP.

"Here everyone is involved," said Pande, 30, as he repaired a car engine in his garage. "If you know someone... they will do what you want and then you pay."

In some ways it was easier to do business during the dos Santos regime, he mused. "Now everything is more complicated than it used to be."

But for some such as Almeida, the anti-graft drive is starting to bear fruit.

"Some institutions have become more serious. People are more conscious that asking for money... to do their job is wrong," Almeida said.

"This is good for everyone," he said.