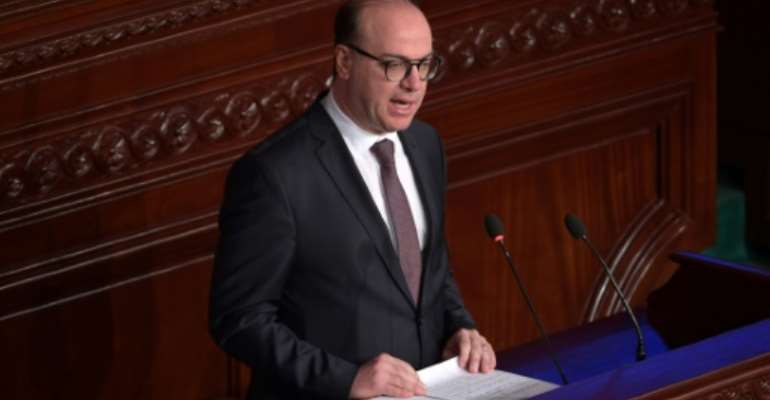 Elyes Fakhfakh was named prime minister-designate by Tunisia's president Kais Saied at the end of January and tasked with forming a government within a month. By FETHI BELAID (AFP)

Tunisia's new government won a confidence vote in parliament on Thursday, after more than four months of political wrangling since elections.

Former finance minister Elyes Fakhfakh was named prime minister-designate by Tunisia's president Kais Saied at the end of January and tasked with forming a government within a month.

A previous cabinet team put forward by him was rejected by the Islamist-inspired party Ennahdha, which won the most seats in October's legislative election but fell far short of a majority in the 217-seat assembly.

But Fakhfakh's revised lineup won the vote 129 to 77 after a debate which started on Wednesday and lasted more than 14 hours.

Ennahdha had given its support to the new cabinet after being handed six portfolios.

Fakhfakh said last week that despite difficulties, the negotiations had taken place "in a completely democratic manner".

The confidence vote follows a power struggle between the president and Ennahdha, with the party previously threatening to take steps to force out Fakhfakh.

The government will be sworn in at a ceremony to be held later on Thursday at the Presidential Palace, the president's press office told AFP.

Tunisia, which has been managed for more than four months by the outgoing government, has been trying to revive a struggling economy but unemployment continues to affect the population, especially the young, and inflation is eroding an already low purchasing power.

The new government will be tasked with relaunching discussions with the International Monetary Fund, which in 2016 approved a four-year, $3 billion loan for Tunisia in return for major reforms, some of which are disputed.

Due to delays, the country has only received about $1.6 billion so far, while the facility ends in April and the first repayments are due in November.