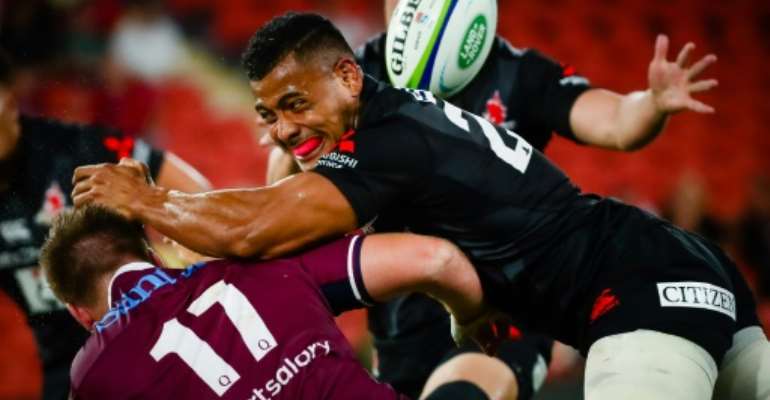 'Advanced discussions' are taking place about the Sunwolves' match against the ACT Brumbies in Osaka on March 6. By Patrick HAMILTON (AFP)

Super Rugby officials scrambled to deal with the coronavirus outbreak on Thursday, saying they were working to relocate a match in Japan and announcing sanitisation stations and temperature checks for all teams.

The southern hemisphere competition, featuring teams from Australia, Argentina, Japan, New Zealand, and South Africa, has so far not had to cancel any matches due to the deadly COVID-19.

But SANZAAR said it was in "advanced discussions" about the Sunwolves' game against the Brumbies on March 6 in Osaka, after the Japanese government recommended cancelling, postponing or scaling back sports events over the next fortnight.

"SANZAAR is now working to determine if this match can be relocated," the governing body said in a statement, adding that it was talking with medical chiefs from member countries about how to tackle the novel coronavirus.

So far, there have been no identified cases of any players, management, match officials or family members with symptoms, including the Sunwolves, who are currently in New Zealand for Saturday's match against the Hurricanes.

"Daily review and monitoring of all participants is now in place under an agreed protocol," SANZAAR said.

Under the new regime, sanitisation stations will be set up at all team venues and players and staff will need to undergo temperature checks.

The spread of the coronavirus has led to the postponement of a host of sporting events in Japan, raising fears that the outbreak could affect the Tokyo Olympics due to begin on July 24.

The outbreak is also having an impact upon the broader global sporting calendar, with the postponement of the Chinese Formula One Grand Prix in Shanghai and Ireland's Six Nations rugby match with Italy in Dublin on March 7.