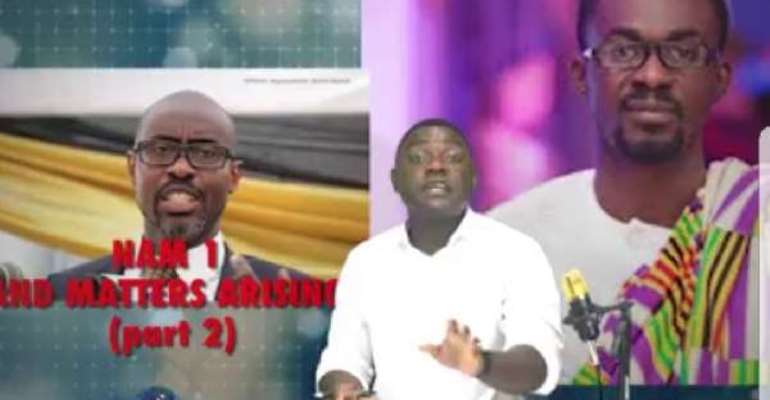 The court fined Kevin Taylor to pay GHS2.95 million in damages to lawyer Ace Ankomah but latest comments by the social commentator show he is not willing to pay a pesewa of that money to the private lawyer.

Mr Ankomah sued Mr Taylor and his Loud Silence Media for GHS10 million for alleging that he had a hand in the ordeals of embattled Menzgold CEO Nana Appiah Mensah (NAM1).

Speaking on his programme 'With All Due Respect' following the judgement, Mr Taylor stated, “I have a silver bullet for Ace Ankomah and I’m going to release it”, adding: “I’m not done with Ace Ankomah”.

“If anybody is listening, tell Ace Ankomah I said: ‘I’m not done with you’”, Mr Taylor said.

He blasted some Ghanaian media houses for splashing his pictures on their front pages. “All these newspapers, when you put their capital together, it will not even reach GHS100,000. … You are zombies, you’re licking a dirty old ass, so, you don’t want to speak truth to power”.

He revealed: “Only one media house called me when they heard that Ace Ankomah sued some Kevin Taylor”, adding: “The basis of Ace Ankomah’s case is weak like some old man’s balls” and further described the various media houses that reported on the matter as “idiots”.

“I want people to understand that Ace Ankomah isn’t suing me Kevin. The name on that thing is Kevin Ekow Baidoo Taylor, I can confidently tell you guys that that is not my official name and I can confidently tell you guys that the address on that thing for Loud Silence Media isn’t that address [at which] Loud Silence Media was registered, so, Ace Ankomah is actually suing a different person and Ghanaians are so excited; when I say Ghanaians, the newspapers, the media houses, the ignorant media house guys, the ignorant media, the hungry, butt-licking media guys, you guys are hungry.

“All the papers that put my face as front [page], I just have a simple message for you: with all due respect, you guys are very very ignorant … I’m bigger than the President today, yea, my fellow journalists who are hungry, they can’t even sell 100 papers in a day but they take the time to put Kevin Taylor’s picture on their front page; put something better [there] that is going to sell your paper. You’re an idiot; my US$1 is your GHS6.70 and you are following me around. Are you stupid?”

Mr Taylor also said no one served him any writ of summons over any matter for a court to pronounce judgement against him.

“I saw it on people’s Facebook pages and this morning I realised that I was on every newspaper in Ghana: Kevin Taylor has been sued by Ace Ankomah, he’s gotten judgement and that he has won GHS2.95 million. A judge said: Ace Ankomah, go after Kevin Taylor and take GHS2.95 million. I think the equivalent of that in dollars is about $500,000; nice, I think we can use that money to build toilets in our courts …

“I didn’t receive anything from Ace Ankomah; honestly, I never knew about this, I just got to know it, because, nobody has approached me with any summons, no bailiffs came to my house, to my office to present anything to me and say: ‘Kevin, somebody has sued you in Ghana and you have to be in court or bring a rep in court, nobody’. After I saw the judgement on other people’s platforms, I’m choosing my words well because nobody has sent anything, even to me on Facebook that this is a judgement, no. I saw it on social media, people flying it on social media that Ace Ankomah has won a case against me.

“If you watch the document very well, you realise that the name on it is Kevin Ekow Baidoo Taylor, so, my question to Ace Ankomah is simple: he should just try and call the USCIS and ask them that do they have anybody by name Kevin Ekow Baidoo Taylor in their system? That is the first question. The passport office, the US Embassy in Ghana, they can go check if there’s anybody by name Kevin Ekow Baidoo Taylor in the US; that is the first one. I also saw there was an address on Loud Silence Media on the suit, it was a New York address. I’ll like Ace Ankomah, again, to try and call the State Revenue Agency and ask them that Loud Silence Media, which address or where was it registered. Was it registered in New York or in any other country?

“There are two things on the judgment that you have to understand that Ace Ankomah is actually not after me because if you go into the USCIS, you can go find my full name there; the name Ace Ankomah sued is Kevin Ekow Baidoo Taylor, so, I’m just giving him clues, I’m not going to tell him what to do.

“And, also, Ace Ankomah should ask himself that: ‘Did Kevin ever receive any summons from the court to represent, to be represented or to come to court? Also, what date was Kevin Ekow Baidoo Taylor served and where, in which state was he served? If Ace Ankomah answers all these questions, then he has a case but for now, all I can tell you is that I don’t know anything about the guy Ghanaians are reporting in their newspapers or whatever. I don’t have any idea. My name is not Kevin Ekow Baidoo Taylor”.