Martin Amidu Is Chained In The Dungeon Forever! 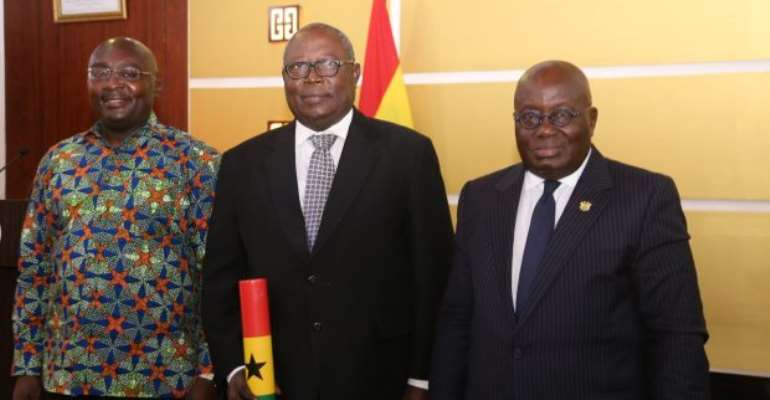 Mr. Martin Alamisi Amidu in his so-called solo fight against corruption as a Citizen Vigilante gathered masses and inspired hope in the Ghanaian that if given the opportunity, state power and resources he was going to solely fight corruption to the admiration of many. Many of us doubted him maybe because we saw a bitter Amidu who was only seeking vengeance and not showing genuine love for his nation.

Time progressed, his last epistle on the 5th of December, 2016, clearly exposed his intentions. In it, he called on all Ghanaians to vote President John Mahama out by voting for Nana Addo so that he Martin will have the power to retrieve Woyome’s money meant for the poor taxpayer.

Ghanaians heeded to this call because, at the time, any stealing or administration infractions were said to be Mahama’s doing according to Mr. Amidu. And so, the only way to stop stealing of public funds and catch all the thieves in Ghana was voting for Nana Addo and appointing Martin to the office of the Special Prosecutor.

Fast forward in government, Nana Addo appointed Mr. Martin amidst celebration and popular support from the people of Ghana. Hallelujah...the no-nonsense man has been given power and will be given resources to catch all the thieves (both past and present) and chase out all the crazy, corrupt public officers. To us, the Messiah has just come and we didn’t need the Auditor General any longer.

Little did we know that the appointment of Mr. Martin Amidu was a strategic move by Nana Addo and his government; This was to get his wings clipped, his mouth shut and his operational zone as a citizen vigilante Limited.

Today, with the state prosecutorial powers; with the state, resources to investigate; with a comfortable office to operate from and with the popular support from Ghanaians, Mr. Martin Amidu is a pale shadow of his citizen vigilante persona when Mahama ruled.

Mr. Amidu had written back to some petitioners either to complain that his powers were limited and that their requests fell outside of his jurisdictions or their requests don’t merit any form of investigations to start with. In some cases, Mr Amidu came crying foul that he was deliberately being overlapped by some state officials and other agencies in the case of the Anas petition against Mr. Charles Bissue.

Why will Mr Amidu and the Office of the Special Prosecutor not give independence to work? Why has the OSP Act restricted the jurisdictions of Mr Amidu so that he can’t investigate and prosecute financial and economic crimes? Why will state agencies commission parallel investigations into cases Mr. Amidu is petitioned to handle?

The very latest issue in context is the ASEPA petition to the Special Prosecutor to investigate the galamsey thievery and corruption which were alleged by the Minister for Environment and counter-allegations from some of the persons the Minister accused. Mr. Amidu in his response to ASEPA indicated that the CID is already investigating the matter and so his office wouldn’t want to also engage in a parallel investigation. While at that, Mr. Amidu refers to the petition as one full of conjectures and innuendos. This is Martin Amidu in 2020 ooo. A case he can’t investigate has already been floored with prejudices by him.

Mr Amidu isn’t a principled man as he made us believe. He was only looking for a space to seek vengeance and not that he despised and abhor corruption and also loved Ghana so much. Mr. Martin Alimisi Amidu has been patronized by Nana Addo and his NPP, his bitterness against Mahama and the NDC was conveniently exploited, his credibility exposed to attacks and the Ghanaian people have been finally been incited against him. It is a shame!