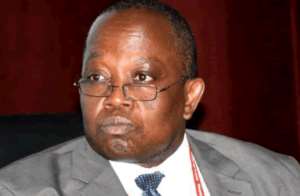 I could smell a rat as soon as the then outgoing President of the Republic of Ghana, His Excellency John Dramani Mahama, promoted Mr. Daniel Yao Domelevo to the position of Auditor-General.

I was simply annoyed that a president leaving power within a week was promoting people before his exit. If he felt the man was worthy of promotion, why could he not do it long before he went into election 2016 and woefully lost it?

Should the prerogative of promoting people, signing new contracts as it was in the case of fictitiously leasing 75% of the Nyinahini bauxite deposit to his younger sibling, Ibrahim Mahama, not belong to the incoming president?

Furious as I was at the promotion of Daniel Yao Domelevo, I decided to publish an article to criticize the whole process and call for the annulation of his promotion. Just as I was about to author the article, a friend of mine who knows Yao Domelevo very well as his father-in-law, pleaded with me to stop, narrating to me how honest he is, although a staunch member of the NDC, he said.

Knowing how honest this friend is, I believed him. I stopped putting out the intended publication.

However, as an adage holds it true that “A leopard can change its name but it can never change its spots”, Mr Domelevo could not rid himself of his NDC political colouration and spectacles. He has since been pretending to fighting corruption but selectively in favour of the NDC.

Corruption is corruption and like fraud, it vitiates a contract. Therefore, whoever commits acts of corruption, be they NPP, NDC, CPP or whatever political party member, must be held squarely accountable and condemnable.

Nevertheless, Mr Domelevo could be seen to be going after people of a particular political party, thus, NPP. Does he intend by his actions to incite public fury against the ruling NPP government and party to ultimately bring back into power NDC, his political party? I suspect so!

Nonetheless, as “Man proposes and God disposes”, some attempts by Mr Domelevo to realise his diabolic aim and objective are backfiring on him. He accused the Senior Minister, Hon Osafo Marfo, (I am not his fan anyway), of entering into agreement with, and making full payment of US$1 million to, Kroll Associates UK Ltd, a United Kingdom-based company without following due procurement process.

Mr Domelevo alleges that “a government contract with Kroll Associates UK to provide consultancy services was unsatisfactory. It was wrong to use a single-source procurement process, Kroll Associates UK Ltd, contracted in 2017 to review electronic evidence, identify assets abroad and manage a joint Civil and Criminal Assets recovery process.”

In challenging the arrangement, he explained that by Ghana’s 1992 Constitution, the contract required parliamentary approval because it involved a foreign company but Hon Osafo Marfo did not do that.

He was on point if indeed Osafo Marfo evasively ignored parliament to do as he is alleged to have corruptively done. However, when Osafo Marfo challenged him and finally referred him to EOCO for investigation for abusing his powers and also finally sued him (Domelevo), he started protesting, whimpering like a cat. This tells Mr Domelevo had got it wrong somewhere.

Again, this award-winning man of integrity for year 2019, has come out with names of three or four current Members of Parliament and Ministers accusing them of having benefited from the Ghana Education Trust Fund (GetFund) which to him is fraudulent on their part. Mysteriously, all these four persons are members of the ruling political party (NPP).

These people benefited from the fund as Members of Parliament during the NDC regime under former President John Dramani Mahama. However, Mr Domelevo has put it out that they availed themselves of the fund in year 2017, thus, under His Excellency Nana Addo Dankwa Akufo-Addo’s regime. Also, many NDC Members of Parliament, with their rich family members and cronies alike did benefit from it but he left their names out.

This is malicious and criminal on the part of Mr Domelevo. His true colours are clear for all to see. It says, “The truth will out”. It has taken long but indeed, the truth about the entrenched NDC activism and position of Mr Domelevo and his diabolic intents are today exposed.

Some people on “Boiling Point” on Oman FM last night mentioned some of the NDC MPs and their families that have benefited from the GetFund. Again, the GetFund in its rules as read, is not only intended for poor but brilliant students. It is there for certain categories of persons.

Please Ghanaians, let us love reading, let us love researching and let us love analytical thinking before we make fools of ourselves. As said by a panellist on “Boiling Point”, on Tuesday night, 25 February 2020, we had better go back to parliament to seek changes in the laws governing the GetFund or else, MPs and other supposedly rich persons do rightly have access to the fund as are the until now erroneously-believed poor but brilliant students.

Shame on Domelevo! As we expose all corrupt officials to make Ghana work for the general good of the citizenry, let us expose the political biases of Domelevo. His intents are disingenuous, spiteful and shameful.

He is not as sincere as I was made to believe! As Charlotte Osei’s irresponsible behaviours brought her down, so shall be the culmination of the biases by Domelevo.

Make a date with me for updates on the ongoing Kumawu chieftaincy dispute. With God on our side, the enemies of Kumawuman and the greedy bastards seeking to avail themselves of Kumawuman funds and lands shall be brought down to their frail knees by the grace of God Almighty. God doesn’t care if they are politicians, traditional overlords, rich persons or well-educated folks.

A word to the wise is sufficient! Rockson Adofo Wednesday, 26 February 2020