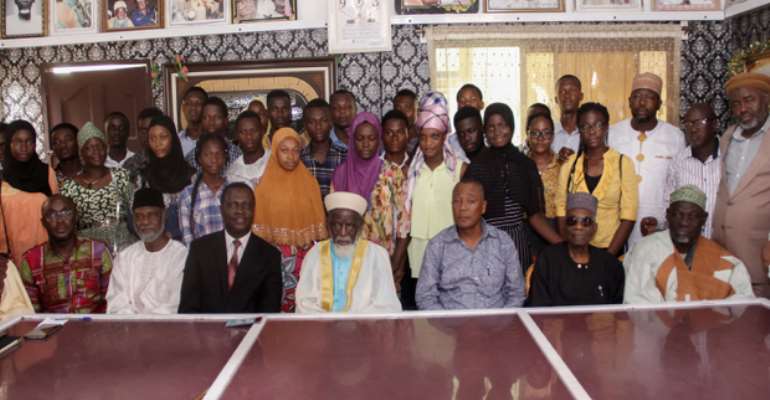 Some of the beneficiaries and the dignitaries

Some 40 Zongo students were on Monday given scholarships to study medicine in Cuba in fulfillment of Vice-President Mahamudu Bawumia's promise of working towards acquiring such opportunities for the Zongo youth who qualify to pursue studies in medicine.

The first batch of beneficiaries of the opportunity sought the blessings of the National Chief Imam, Sheikh Osman Nuhu Sharubutu, at his residence on Monday, where the offers were formally given to them.

The beneficiaries were accompanied by delegations comprising officials from the Scholarships Secretariat, the Office of the Vice-President and led by the Deputy Minister of Education, Dr. Yaw Osei Adutwum.

The beneficiaries who were drawn from various Zongos across the country received counselling from Zongo leaders who were represented by the executives of the National Council of Zongo Chiefs, as well as representatives from the various Islamic sects.

In his address, Dr. Adutwum described the Ministry of Inner Cities and Zongo Development as his favourite ministry, as it offers the government the opportunity to get optimal returns from initiatives that transform the nation.

He said the refusal of governments to channel resources to the inner cities and zongo communities which make up 70 per cent of the country's population meant that only 30 per cent were likely to benefit from government projects.

He, therefore, said the mining of the brain through education should not be a political banter but rather it should be regarded as an apt investment towards transforming the nation.

While offering a solemn prayer to the students, the National Chief Imam advised them to stay focused on seeking knowledge, adding “it is everything that guarantees your elevation in society as Allah has said that it is those with knowledge that understand the mystical composition of God.”

The Second Ameer of the Ahmadiya Muslim Mission, Abdul Wahab Issah, for his part, urged beneficiaries not to engage in any act that may jeopardize the chances of future students who would want to have such an opportunity.

“Cuba is a place that has so many fine beaches, all kinds of drinks. So if you allow yourself to be misled, you will regret it and you would have dealt a very bad blow on the government and the National Chief Imam himself,” he stressed.

Also present was the Board Chairman of the Zongo Development Fund, Rear Admiral Muniru Tahiru (rtd), who is a product of a Zongo, having been born and bred at Tudu, Accra, and Minister at the Office of the Vice-President, Abubakar Saddique Boniface.