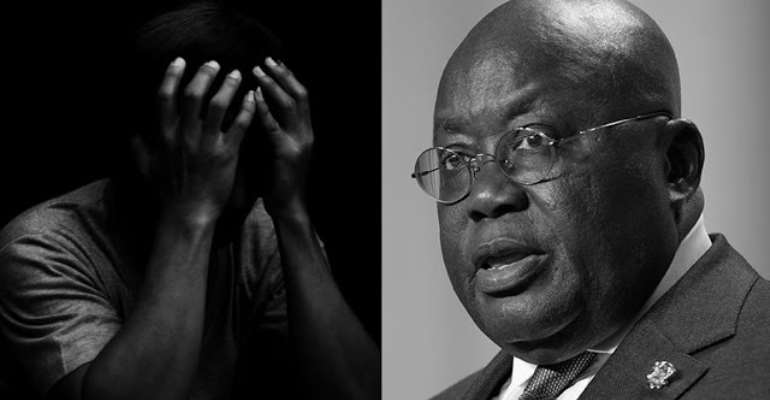 An unemployed contemplating suicide and the Ghanaian leader, Akufo Addo

Suicide is a global problem taking place in every part of the world but the sharp increase in suicidal tendencies between 2016 and 2019 in Ghana, is a problem that needs to be investigated to find the actual cause behind this unprecedented high suicide rate.

It is very clear that since Ghanaians were sick and tired over massive corruptible activities in the country under John Mahama, the NDC miserably lost to NPP in the 2016 general elections. Unfortunately, Ghanaians have been deceived without realizing it.

The NPP government who made frustrated poor Ghanaians to believe that they are coming to save them from corruption is rather a government composed of a family of nepotistic crooks that holds the master-key of corruption.

You shouldn't be surprised if Ghana ranks the third corrupt country in the world today. This is not a joke, it a serious problem every concerned Ghanaian must demand answers from Akufo Addo's government of how it happened.

When people are denied common basic amenities, employment, and proper medical care, many lose their thinking power to make the right decision. I can clearly see that many Ghanaians are totally confused about the right political party which can save them.

The truth is, intelligent Ghanaians or voters, are supporting and promoting corruption in the country themselves because both NDC and NPP don't deserve your votes. In Ghana, traders that often say that "it's because of you I have reduced the price are rather those that inflate the prices to benefit them."

The NPP is, therefore, a criminal political party as well, which has been able to manipulate and convince Ghanaians by appointing a Special Prosecutor, called Martin Amidu, who continue to drain Ghana's resources, yet, has never prosecuted a mouse that stole a piece of cheese from his kitchen, let alone a corrupt politician.

I can’t describe where this energy often comes from but all that I can say is I feel so strong to shout it loud and clear that Akufo Addo is one of the worst Ghanaian leaders to take office and if given another four years, the current high suicide rate will rapidly increase without any solution.

It will be recalled that last year, in the month of September, the Chief Executive Officer of the Mental Health Authority, Dr. Akwasi Osei called on Ghanaians to unite and give a hand in reducing the unprecedented number of suicides taking place in the country.

Why suicides fellow Ghanaians? Find out and you will know that poverty in mineral-rich Ghana, is the main reason many have taken their lives. The suicide rate in Ghana has increased sharply because the country is under a leader that lacks efficiency and productivity.

The NPP wants to investigate the Airbus corruption scandal the former government, NDC was involved, however, the government is not interested in the investigation of missing excavators taken from illegal mining sites.

According to Mr. Amidu, the Criminal Investigations Division (CID) of the Ghana Police Service is handling the case. Why Mr. Amidu? Because the case will naturally die without making any headlines since the CID is similarly weak and corrupt like the country's judiciary system.

Akufo Addo's government also promised to fight against crime, yet the government ignored the protest of concerned Ghanaians and quickly released two new high printed currencies into the market of a country with a troubled economy because he desperately needs money for his election campaigns.

And when the Cedi rapidly depressed, the criminal government of the NPP even though know the reason the Cedi plummeted, Bawumia, the conman-Vice president thinks Ghanaians are stupid, according to him, "a committee will be set up to investigate the rapid fall of the Cedi."

Bawumia, please, tell Ghanaians what the committee you suggested found. No committee was formed to investigate the plummeted Cedi, it was just to deceive Ghanaians to avoid knowing the real reason behind the Cedi depreciation, yet, in Ghana, we have economists who know the reason but they prefer to remain quiet.

Sincere Ghanaians must understand the reason this writer is always under attack with false names, accompanied by insults because I am revealing too much but the truth is, the attacks are my inspiration to know that some people are uncomfortable, so I need to knock the nail at the same direction.

Akufo Addo has created many difficulties for Ghanaians, despite having the largest number of ministers in Ghana's political history. The government keeps boasting about an improved economy, while many are unemployed and can’t even boast of three regular meals per day.

I think it will be a good decision for intelligent Ghanaians to vote for one of the new political parties because both the NDC and NPP are deeply corrupt, the only difference between the two leaders is Mahama exhibits intelligence in whatever he does, as for Akufo Addo, I have run short of words to describe him.

To convince people that you are a good leader and care about them, the Ghanaian leader must listen to the voice of the people but that’s the case. The disguised dictator under democratic rule continues to steal with impunity because there is nobody to expose them.

Akufo Addo has abandoned Ghanaian students faced with the threat of coronavirus in China, yet he is appealing to Ghanaians to vote for him. However, he has forgotten that some of the Ghanaians he wants them to vote for him children are among the students in China.

Akufo Addo, pregnant with hate and jealousy has abandoned projects which belong to suffering Ghanaians because they were started by the former government, NDC. Which intelligent leader will do such a thing?

Unless someone who lacks intelligence, the reason I find it difficult to understand why Ghanaians will vote for such a leader. Real Ghanaians need to show their intelligence because the developed world is watching us.

Ghanaians are not fools, so why should they do something the developed world will not do? He claims to be on the path of democracy, Ghanaians should ask him which true democratic country in the developed world abandons projects because they were started by the opposition?

For abandoning a project which belongs to a country, Akufo Addo has already disqualified himself to be a president. The truth is bitter than the bile, yet I know that sincere Ghanaians will reason with me.

He will not get a single vote for that political blunder assuming he is in a developed country. At the same time, Ghanaians mustn't accept this blunder as something Ghana deserves because we are in the third world, if so, then excuse me to say that all Ghanaians are stupid.

Ghanaians must think deeply and stop voting for any corrupt political party in the country because your votes will determine everyone, including your children's future.

Just imagine a leader who quits the International Money Fund only to pile up debt on his country through borrowing, which has gradually exhausted the country’s economy.

Every good leader must know that when borrowing from international institutions and banks appeared to be an easy solution to stem economic crises resulting from the volatility of commodity prices.

But he doesn’t care because he and his elephant size ministers have enough to eat and know the right place to steal money from the government coffers, else, they will not be making foolish noises of doing better for the suffering masses in Ghana.

Sometimes, it is difficult to recognize a bad leader, especially since the first impression is misleading but it’s very easy to know that Akufo Addo is a poor leader.

Ghana is too rich for its citizens to be killed by worries and poverty, to commit suicide or to force the youth to leave the country to die in the Mediterranean. Ghanaians must, therefore, find the right political party in the country to vote for.

Dictators in power have always the upper hand to do anything they want for their selfish benefits. Akufo Addo will, therefore, rig to win the 2020 elections but along the way, his lack of skills, knowledge, and greed, will expose him and the Ghanaian population will cry for salvation.