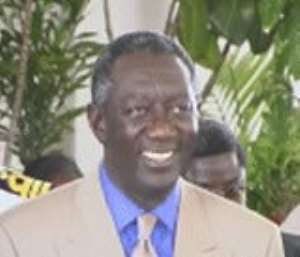 President John Agyekum Kufuor on Friday launched a multi-billion cedi ambitious malaria control programme targeted at the reduction of malaria prevalence within the Obuasi Municipality by 50 per cent in the next two years.

It involves carrying out periodic mass spraying, formulation, development and implementation of a sustainable system to ease the severe burden of the disease in the area, educating the people on preventive measures and assisting health professionals in the early detection and treatment.

The management of AngloGold-Ashanti is providing three million dollars to fund the programme, which is being managed by the National Malaria Control Programme in partnership with Noguchi Memorial Research Institute (NMRI) and some reputable medical institutions in South Africa.

A Satellite Research Centre to facilitate its smooth implementation, provide training support for the national roll-back malaria campaign and to co-ordinate AngloGold-Ashanti's malaria control activities at other mine sites within the West African Sub-Region had already been established at Obuasi.

President Kufuor described the programme as "One more manifestation of what a caring corporate organization can do for its host country and communities. I applaud the management of AngloGold-Ashanti for this display of corporate responsibility. With good management and such goodwill, this programme should come to serve Obuasi and Ghana into the long term."

In addition; he commended the decision to make the research facility available for use by NMRI, other government departments and relevant agencies saying, he saw in that major corporate initiative, the creation of an invaluable asset for the country and Africa in the fight against malaria, which was threatening the future of the continent. Statistics showed that the disease killed over two million people globally and about 90 per cent of the victims were Africans, among them thousands of children.

President Kufuor said it was in the light of this that the programme, a major battle against the disease should be welcomed and supported and called on the people to co-operate with the teams specially trained to carry out the essential aspects. Mr Bobby Godsell, Chief Executive Officer of AngloGold-Ashanti, said the idea was to stage a war against mosquito and malaria, covering every house within the municipality.

He said health of the people was important to them, saying, "We must make money but must also do good as a way of renewing our social licence to operate."

Dr (Mrs) Constance Bart Plange, Head of the National Malaria Control Programme, said even though the country had made some progress in the fight to bring down the prevalence rate of the disease, it still had a long way to go and appealed to Government to give the highest priority to its activities.

A survey conducted last year, showed that about 30 per cent of households now have Insecticide Treated Nets (ITN) as against 2.7 per cent in 2003 with close to 35 per cent of children under five years and pregnant women sleep in the nets while more than 40 per cent of pregnant women use drugs to prevent malaria.

This is believed to have led to the continuous drop of outpatient cases from 3,552,836 in 2000 to 3,049,949, last year. Dr Plange said "Since the mosquito has learnt to bite without missing, we must also aim at eradicating it without resting. We should not create maternity homes for mosquitoes to breed." Nana Asiama Guashyia Ababio, New Edubiasehene and Acting President of Adansi Traditional Council, said the nation could not turn its back on the disease and must endeavour to win the battle against it.