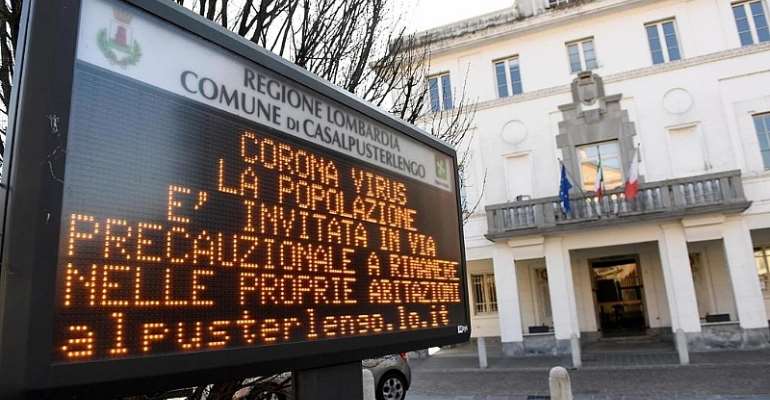 Italy has expanded quarantine measures in a bid to contain the coronavirus outbreak in the north, after the number of cases topped 100 – two of them fatal. Iran has also imposed lockdowns after eight deaths, while South Korea has raised its COVID-19 alert to the "highest level".

The epidemic has now killed nearly 2,500 people in China as it continues its relentless global expansion.

The World Health Organization (WHO) also warned Africa's poor health systems left it vulnerable to the COVID-19 disease, which spilled out of China to more than 25 countries.

Responding to the rising number of new cases, Italy's Prime Minister Giuseppe Conte said 11 towns in north, in the Lombardy and Veneto regions, would be placed under quarantine, affecting about 50,000 people.

"More than 100 cases" have now been reported throughout the country, Lombardy president Attilio Fontana told SkyTG24 television, with 89 of those centred around the small town of Codogno, about 70 kilometres southeast of Milan.

Two people have died from the so-called COVID-19 epidemic in Italy, which was the first country to ban direct flights to and from China in January.

Iran deaths on the rise
Iran ordered the closure of schools, universities and cultural centres across 14 provinces from Sunday following eight deaths in the Islamic Republic -- the most outside East Asia.

"The concern is ... that we have seen ... a very rapid increase in a matter of a few days," said Sylvie Briand, director of the WHO's global infectious hazard preparedness department.

The number of infections has nearly tripled over the weekend to 602.

Led by an outbreak cluster in a religious sect in the southern city of Daegu, South Korea now has the most infections outside of China -- apart from the Diamond Princess cruise ship docked in Japan.

"The next few days will be crucial," Moon said following a government meeting on the virus.

"The government will raise the alert level to the highest level according to experts' recommendations."

More than 300 cases have been linked to the Shincheonji Church of Jesus sect in Daegu with some 9,300 members either quarantined or asked to stay at home, according to the Korean Centers for Disease Control and Prevention.

More than 1,240 have reported symptoms.
The new cases also included a Samsung Electronics employee at a plant in Gumi city, leading the tech giant to suspend operations there until Monday.