CPJ Urges Togo Government Not To Shut Down Internet 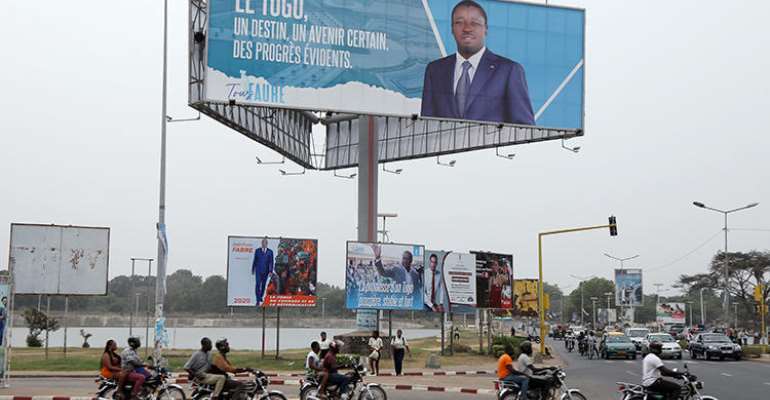 A billboard of President Faure Gnassingbe is seen in Lome, Togo, on February 19, 2020. CPJ recently joined a letter calling for the Togolese government to maintain internet access throughout the upcoming election. (Reuters/Luc Gnago)

The Committee to Protect Journalists joined 27 other press freedom and human rights organizations in a letter dated February 19 calling for authorities in Togo to maintain the stability and openness of the internet and social media platforms.

The call came in response to concerns that the government intends to shut down or disrupt the internet during the presidential elections scheduled for February 22. The letter, addressed to Cina Lawson, Togo’s minister of posts, digital economy, and technological innovations, encourages the government to “undertake the necessary measures to ensure that the internet service providers and relevant actors ensure an open, accessible, and secure internet throughout Togo during this electioneering period.”

The letter notes that the Togolese government is currently facing a court case alleging that its internet shutdown in 2017 violated citizens’ rights.

Read full letter below:
February 19, 2020
#KeepIton: Joint letter on Keeping the Internet Open and Secure During the Elections in Togo

Re: Internet shutdowns during Togo’s elections

Dr. Mohamed Ibn Chambas, Special Representative of the Secretary-General and Head of the United Nations Office for West Africa and the Sahel (UNOWAS);

The Chief Observer of the EU Election Observation Mission for 2020

We are writing to urgently request that your offices ensure the stability and openness of the internet and social media platforms in Togo. We have received information that your government intends to shut down the internet during the presidential elections scheduled for February 22, 2020. On​ behalf of more than 210 organizations from over 70 countries that make up the #KeepItOn Coalition, we appeal to you, Minister Lawson, to ensure that the internet including social media and other communication channels are open, secure, and accessible before, during, and after the presidential elections in Togo.

Internet shutdowns violate fundamental human rights such as freedom of expression, access to information, and the right to peaceful assembly, among others guaranteed by national, regional and international frameworks such as the Togolese Constitution, the Universal Declaration of Human Rights (UDHR), and the African Charter on Human and Peoples’ Rights (ACHPR).

Madam Minister, we would also like to remind you about the current court case before the Economic Community of West African States Community Court of Justice brought against the Togolese republic for shutting down the internet back in 2017. Reiterating the plaintiff’s argument, the internet shutdown then violated the fundamental rights of the Togolese citizens and if it were to happen again, will contravene their rights yet again.

In November 2016, ACHPR adopted a resolution on the right to freedom of information and expression on the internet in Africa, which noted its concern over “the emerging practice of State Parties of interrupting or limiting access to telecommunications services such as the Internet, social media and messaging services, increasingly during elections.” ACHPR/Res. 362(LIX)

The UN Human Rights Committee, the official interpreter of the International Covenant on Civil and Political Rights, emphasizes in its General Comment no. 34 that restrictions on speech online must be strictly necessary and proportionate to achieve a legitimate purpose. [1] Shutdowns, by contrast, disproportionately impact all users, and unnecessarily restrict access to information and emergency services communications during crucial moments. Shutdowns are neither necessary, nor effective at, achieving a legitimate aim, as they block the spread of information, contribute to confusion and disorder, and obstruct public safety.

The open internet has fostered unprecedented creativity, innovation, and access to information and to other kinds of social, economic, cultural, and political opportunities across the globe. The technical means used to block access to information online often dangerously undermine the stability and resilience of the internet. Network disruptions also destabilize the internet’s power to support small business livelihoods and to drive economic development. A 2016 study by the Brookings Institution, a prominent think tank, revealed that shutdowns drained $2.4 billion from the global economy between 2015 and 2016. [5]

As a coalition that believes in the internet as an enabler of all other human rights, we are confident that access to the internet and social media platforms can foster transparent and fair elections and enable citizens participation in the upcoming elections.

We, therefore, call on you to undertake the necessary measures to ensure that the internet service providers and relevant actors ensure an open, accessible, and secure internet throughout Togo during this electioneering period. Internet​ shutdowns must never be allowed to become the new normal in Togo.


We respectfully request that you use the important positions of your good offices to: