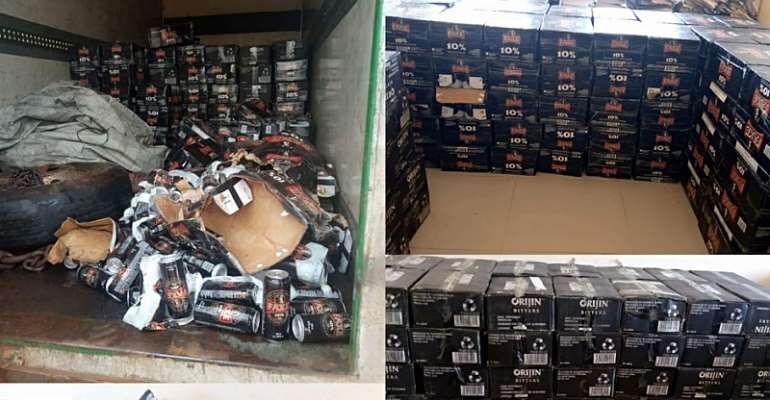 A Ghanaian shipping vessel has been impounded in Liberia with smuggled goods.

The vessel was impounded at the Buchanan port, Grand Bassa County by the Liberia Revenue Authority (LRA).

Local authorities said they found 290 cartons of liquor, 221 cartons of Faxe 10% and 70 cartons of Origin and assorted mining machines and other equipment in the vessel.

Local newspaper, Liberian Daily Observer reported that LRA’s Senior Collector assigned at the Port of Buchanan, Vickie Wilson, accounted that the vessel arrived on Tuesday, February 18 at 2 a.m. at an unauthorized pier with the smuggled goods.

“Goods are smuggled with the intent of escaping tax payment, and if the vessel were not arrested, those who possess the goods would not have paid the taxes due to the government. To establish the actual amount in taxes, the LRA joint security has been called to assist in investigating the incident to establish the actual amount of taxes that would go to the government,” the newspaper reported.

Officials of the revenue authority said that the goods belonged to Liberians who bought them from Ghana and paid the required taxes on them in Ghana but they hired the Ghanaian-owned vessel to smuggle them to Liberia, with the intent of evading taxes.

“The vessel and goods are currently in the custody of the LRA, pending an investigation and, depending on the outcome of the investigation, owners are expected to face penalties in keeping with the revenue laws,” the newspaper reported.

The vessel and its content are being held by the Authority as further investigations are being conducted into the matter.

The Commissioner-General of the Liberia Revenue Authority (LRA), Mr. Thomas Doe-Nah said efforts are being made to strengthen the country’s borders as the current porous nature of the borders was fueling illicit activities in Liberia.

He said “owners [of the seized vessels] will face penalties.”

It is a serious criminal offence to smuggle goods into Liberia as the government has taken a strong stance on the crime due to the huge sums of money it loses as a result.

Smugglers often take advantage of the porous borders and sometimes use unauthorized routes to smuggle goods into the country.

Some analysts have suggested that the high import duties and hefty duties paid demanded at the ports, including a recently introduced US$175 per container agreement fee is fueling the offence.