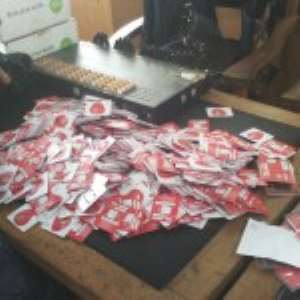 Accra, February 20, 2020: A SIM Box syndicate operating at Community 11 in Tema in the Greater Accra Region was on Wednesday February 19, 2020 busted in a combined operation by officials of the National Communications Authority (NCA), Ghana Revenue Authority (GRA), KelniGVG and the Ghana Police Service. A total of 11 SIM Box equipment with capability of using 352 SIM cards simultaneously were retrieved from the premises along with other illicit equipment used for the criminal activity. It is estimated that an amount of US$1,938,816 in both revenue and taxes have been lost per month assuming each device operated at an average of 18 hours per day.

NCA, GRA, KelniGVG and the Ghana Police Service are continuing with their investigations and will issue further details later.

The February 19, 2020 raid is the third since December 2019. One other SIM Box operator arrested in January 2020 has been granted police enquiry bail whiles the operators of another SIM Box syndicate whose premises were raided and shut down in December 2019 are on the run.

The Fraud Management component of the Common Platform detected numbers used to illegally terminate international inbound calls as local calls. Further investigations in collaboration with the mobile network operators (MNOs) led to the detection of the location of the SIM Box devices.

The Electronic Communications (Amendment) Act, 2009, Act 786 established the minimum rate for international incoming voice calls at US$0.19 through the licensed international gateways. The use of SIM Boxes to bypass the legal routes for terminating calls in Ghana leads to loss of revenue and taxes to both the state and MNOs. It is therefore a criminal offence to operate a SIM Box for the purposes of terminating international calls in Ghana. Offenders are liable to penalties that range from fines to terms of imprisonment. The NCA and GRA working with KelniGVG and the Ghana Police Service are committed to detecting and apprehending SIM Box fraudsters in the country.