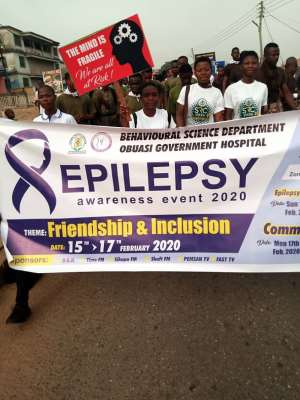 International Epilepsy Day is a special event that promotes awareness of epilepsy in more than 120 countries each year. Every year on the second Monday of February people join together to celebrate and highlight the problems faced by people with epilepsy, their families and carers.

Dr. Kwadwo Asamoah Nyarko Jectey, Medical Supt/Administrator at the Obuasi Government Hospital in his keynote address highlighted on the need to create awareness to reduce the rate of epilepsy in the country. He continued that epilepsy has no age limit.

A day-old child, an adult, and an elderly person can get epilepsy. He advised the people present to know their epilepsy status more especially drivers and other key figures in the society.

Ms. Ramatu Ibrahim, a midwife from Obuasi Government hospital who also sensitized the people on epilepsy said one can give birth if the person is an epileptic patient. She advised the women to present on the need to go for regular check-ups during pregnancy. She continued that pregnant women should be sincere and truthful to doctors and nurses when asked about their epilepsy status. She added that medical precautions and treatment could be given to pregnant women in order to prevent their unborn children from getting epilepsy.

Richard Nyame, from the medical department spoke about HIV and the immune system. His speech included the cause, symptoms and prevention of HIV. He advised the people to abstain from premarital and unprotected sex.

There was a drama to demonstrate and educate people on causes of epilepsy and the necessary first aid to handle such a situation. The drama again schooled the people present on how to handle an epileptic patient in a healthier manner. It again revealed that there is a treatment for epilepsy but only at the hospital.

Alhaji Rahman Amadu, the Chairman for the occasion in his closing remarks advised the people present on the need to have regular check-ups instead of going to churches and spiritualists for consultations and treatment.