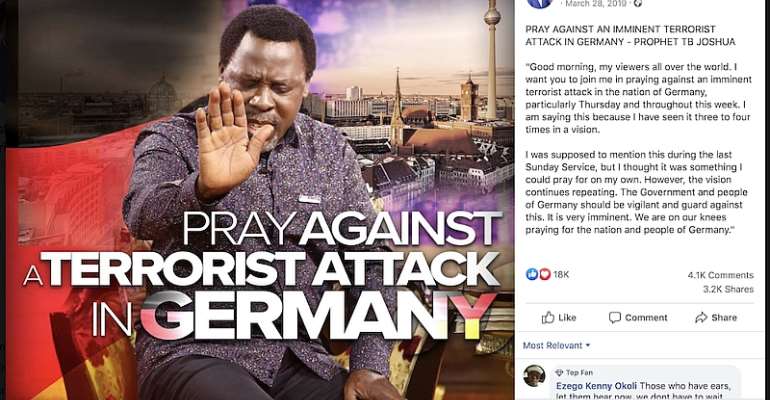 The terrorist attack by a far-right extremist which shocked the nation of Germany and resulted in the deaths of nine people was predicted on Facebook last year by prominent Nigerian cleric TB Joshua.

According to a Facebook post clearly dated March 28th 2019, Joshua had warned Germany of an impending 'terrorist attack' and specifically called for prayers on “Thursday”.

“I want you to join me in praying against an imminent terrorist attack in the nation of Germany, particularly Thursday,” the post states, with Joshua clarifying he had seen several 'visions' regarding this attack.

Late in the evening of Wednesday 19th February 2020, a deadly gun attack was carried out in the German city of Hanau killing nine people “of migrant background” and injuring six others.

The first target was the Midnight shisha bar – popular among Germany's Kurdish community – in the city centre of Hanau where witnesses heard about a dozen gunshots.

The suspect, identified in local media as 'Tobias R', then travelled by car to the Kesselstadt neighbourhood and opened fire at the Arena Bar & Cafe.

The extremist, who was found dead in his house alongside his mother in the early hours of Thursday 20th February 2020, had written a 'manifesto' in which he espoused 'deeply racist views'.

The police stated they are investigating the shocking incident as a 'terrorist attack' and various government figures warned of the dangerous rise of extremist views and groups within Germany.

Two other smaller attacks by far-right extremists took place within Germany in 2019, including the murder of Walter Lübcke, a pro-migrant politician – giving credence to Joshua's warning that the German government must be “vigilant”.

“We pray for God's strength for all those affected by this tragic incident,” a post on the cleric's Facebook page, which reminded followers of his prophetic message, concludes.

Videos on Joshua's popular YouTube channel Emmanuel TV reveal he has prophesied various world events, from the death of pop legend Michael Jackson to the killing of Iranian General Qasem Soleimani by US forces.