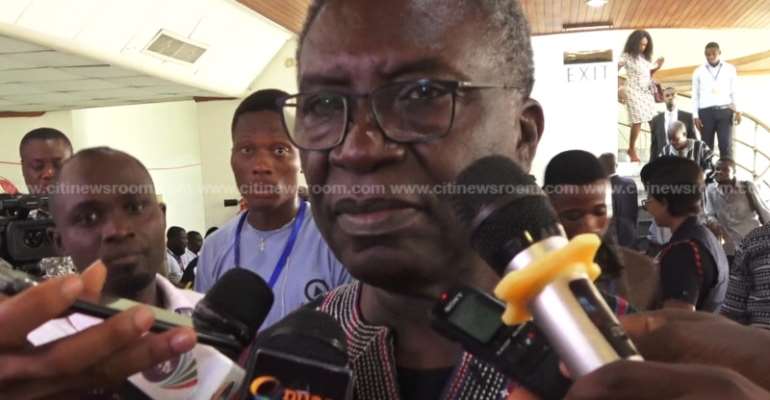 The Minister of Environment, Science, Technology and Innovation, Professor Kwabena Frimpong-Boateng, has denied involving in alleged corruption in the fight against illegal mining.

Speaking to the press after the President’s State of the Nation Address, Prof. Frimpong-Boateng said everything he has done is in the interest of the nation.

There have been calls for him to resign or be axed after in the aftermath of revelations about the disappearance of the hundreds of excavators seized from illegal miners.

The Ranking Member of the Mines and Energy Committee of Parliament, Adam Mutawakilu, even called for his arrest .

However, the Minister remained resolute when queried on the matter insisting that the state will get to the bottom of the controversy.

“Every excavator that has been stolen will be found… I don't what to overstep what the security people are doing so let us be patient. You will get the facts pretty soon,” he said.

In addition, Prof. Frimpong-Boateng refuted claims his son was involved in illegal mining.

“He is not involved in anything and the world will get to know soon,” the Minister said in his brief comments on the matter.

There were some reports that a company linked to son of Prof. Frimpong-Boateng, Jojo Frimpong Boateng, was involved in illegal mining.

The Minister further rated the government 70 percent in its fight against illegal mining but ended the interview when confronted with the reality of polluted water bodies by journalists.

The controversy over the excavators began when Prof. Frimpong-Boateng revealed that most of the excavators that were seized from illegal miners had vanished.

He subsequently wrote a letter to the Police CID to investigate Horace Ekow Ewusi, suspended First Vice Chairman of the governing NPP, over his alleged involvement in the disappearance of the earth-moving equipment.

So far, six persons have been arrested in connection with the missing excavators, and have since been granted bail.