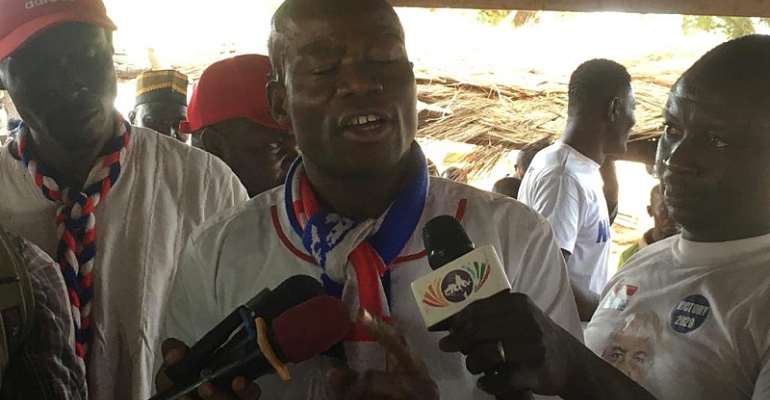 A former District Chief Executive for Sissala West, Salifu Naliwie, has charged delegates of the ruling New Patriotic Party (NPP) in the Sissala West constituency not to be lured by financial inducements in choosing a candidate to represent the party in their upcoming parliamentary primaries.

According to him, that will be the surest way to hold whoever that is elected accountable.

Mr. Naluwie who served under the Kuffuor administration was addressing a heralding crowd of delegates and supporters after filing his nomination to contest the incumbent Member of Parliament for the Sissala West, Patrick Adama in the NPP's 25th April parliamentary primaries.

The issue of financial inducement known in the Ghanaian palace as vote-buying has been a growing concern to both civil society and political pundits in Ghana with some calling for a legal regime to curb the practice.

Although Salifu Naliwie did not mention names, he opined that “ we are not well represented in parliament yet we can't complain because someone claimed to have bought our seat with money. He does not visit the communities or represent our interests but when we complain, he keeps saying he bought the seat with his money. You have the power to change the narrative by voting for me. I will live here with you because I have lived with you all this while and I know my people”.

Flanged by the Sissala West NPP chairman, Bukari Dramani and other party bigwigs in the area, Mr. Naliwie said his first priority if elected will be to unite the various factions within the NPP in the constituency and to establish an office in the area that will make him more accessible to the constituents.

He added that women and other vulnerable groups in the area will be assisted to engage in income-generating activities to alleviate poverty in the constituency.

The Sissala West constituency, which happens to produce Ghana's third president Dr. Hilla Liman is one of the deprived areas in the Upper West region with astronomical poverty levels. The area has no befitting district hospital and is characterized by deplorable roads that are making it difficult to transport goods and services.

Incumbent MP for the area Patrick Adama who is seeking re-election and his predecessor, Alhaji Amidu Sulemana have both been accused by residents of not doing enough to alleviate the sufferings of the electorates.

Mr. Salifu Naliwie, however, gave his word to the delegates that he will lobby with the right institutions and agencies “to restore hope in the constituency”.